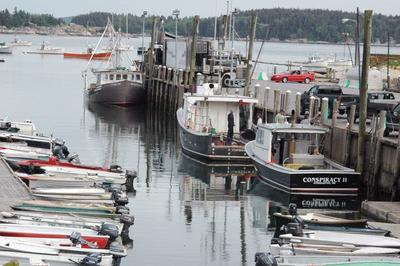 The Maine Department of Marine Resources released initial numbers for 2011 lobster landings, and, for the fourth year running, Stonington is the number one port for live lobster landings, with a value of $46,343,219.

Lobstermen sold 14,854,989 pounds of lobster in Stonington, over a million more than last year’s lobster landings. The value of those landings was up $2.08 million, with an average boat price of $3.19, according to the DMR.

Stonington town manager and member of the Stonington Lobster Working Group Kathleen Billings-Pezaris said she was “amazed” at the landings record. “I’m still frustrated with the low price of lobster overall,” she continued. “I know the volume helps with offsetting the high cost of fuel and bait, but you always wonder how long will this go on.”

“It’s no surprise to those who have been monitoring the catch that the numbers are up,” said Robin Alden, executive director of Penobscot East Resource Center. “Neither is the lower average boat price. The challenge is how to make this bounty of lobster pay, between the cost of fuel and bait and lower [boat] price.”

Statewide, more than 103 million pounds of lobster were landed, an increase of 7.6 million pounds over last year’s total. This record-breaking total is more than double the recorded catch for 2001. Since 2007, the total catch statewide has increased 62 percent.

This “lobster boom” was discussed in mid-February at a Penobscot East Winter Series discussion, with no definitive reason for the uptick in lobster landings. While many agreed there were more lobstermen fishing a longer season, the lobster bounty is likely due to a number of reasons. The scientists on hand for the discussion said the lobster boom could be caused by warmer waters, lobster maturing more quickly and increased settlement (when lobster larvae settle to the bottom). Increased urchin fishing may also have increased kelp growth, creating more places for lobsters to hide.

Alden said the experts all agreed that there was an abundance of lobster, so there’s no immediate worry about the health of the population. “The fact that we don’t understand why the lobsters are so abundant always leaves the worry that there might be some kind of crash,” she said. “In the long term, the crustacean-based fishery is vulnerable. In the short term, the question is to how to make money.”

Vinalhaven and Rockland are the ports with the second and third highest lobster landings, with 5.47 and 5.37 million pounds, respectively. Friendship and Spruce Head round out the top five ports, with 4.33 and 3.8 million pounds. Data is not yet available for Deer Isle.