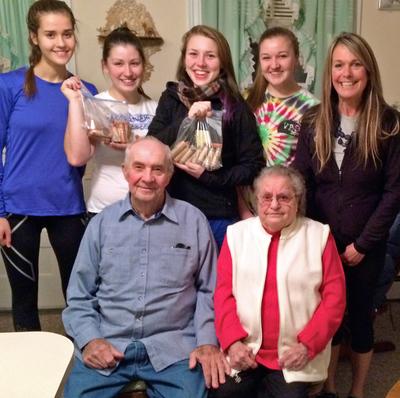 Seated is Norman Wood and his wife Lorna of Deer Isle, who save their change all year long to help the cheering squad build bears and deliver them to sick children at Eastern Maine Medical Center near Christmas. Behind, from left, are exchange student Mathilde Iverson, senior leader Kennady Eaton, captain Belle Merritt, co-captain Kristyn Davis and coach Kimberly Larsen.

For children, holidays can be a time of joy and wonder, of stories and gifts and play. But for children battling serious illness, the holidays may mean an extended stay in the hospital.

The Deer Isle-Stonington High School Mariners cheerleaders work to bring some cheer to those children, by collecting money and building teddy bears to bring to children at Eastern Maine Medical Center near Christmas.

“She called me one day and asked if the girls would be willing to take it over,” said coach Kim Larsen. “We jumped on board, picked places to put cans, and did some community outreach.”

The response has been very positive, said Larsen. “Bags” of pennies are brought to the school, cans get filled quickly, she said.

Once the funds are collected, the girls roll the change and set a day to visit Build-a-Bear at the Bangor Mall. “We make a day out of it,” said Larsen. “We build the bears, we go to the hospital and parade in with Santa hats on.” The team will do an original cheer for the children, and spend time talking with them.

Co-captain and senior Kristyn Davis said the children are usually very shy at first. “But once they warm up, they get really excited,” she continued.

Captain and senior Belle Merritt agrees. “They often have straight faces, but by the time we leave they’re all smiles,” she said. Once, the squad received a text message from one of the doctors saying what an impact their visit had on one young patient. The squad has followed the stories of some of the children they have met. Some have ended happily, and others have not.

“Last year I held a month-old baby,” said Merritt. “I gave him a bear I had made. He was so tiny. We don’t know what happened to him.”

Both seniors agree the experience is a very positive one. “It makes me feel good to know we were there,” said Davis.

“The giving of our community is incredible,” said Larsen. “We’ve collected $600 in pennies. It’s acts like this that show the true spirit of this island community.”