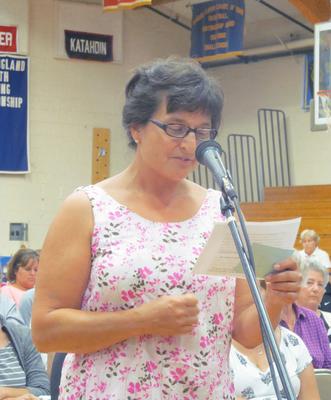 In a 114-98 vote, Islanders added $312,113 to the budget during the district meeting on Tuesday, August 4. The increase resulted from amendments made from the floor to two warrant articles. Article 2, which encompasses expenses for regular K-12 instruction, was re-funded to the tune of $298,501, raising the total allocation for that item to $2,547,149. Article 5, which includes extracurricular expenditures, was raised by $13,612 to total $222,946.

The amendments were proposed with specific purposes in mind.

Elementary school teacher Torri Robbins proposed additional funding to Article 5 to restore junior varsity and B team sports to the budget. The proposed amendment was approved in a 117-86 vote, and the article as amended was voted into effect, 122-87.

Article 17, representing the total amount the school board can spend, had been adjusted to reflect the additions to the budget and elicited comments from the public. Stonington resident Bill Shepard revisited the trend of declining enrollment versus budget increase since 2000, citing the drop in student population from 530 students at the beginning of that period to 251 during the 2009-2010 school year. He described the increase in the budget over that time as being $4.3 million to $6.3 million, an average increase of $200,000 a year over 10 years. Shepard added that the budget jumped more than $400,000 from 2013-14 to 2014-15.

The Stonington tax increase “is going to hurt,” he said.

Shepard also accused Superintendent Mark Jenkins of “cutting from the bottom up,” and asked: “If the teaching staff is so valuable, why were they the biggest group of cuts on the chopping block?” Shepard said that the administration should have looked at more creative ways to reduce expenditures.

CSD Board Co-chairman Stephen York decried the increase, which was a reversal of the reductions demanded by voters in past budget meetings. He said the proposed cuts in staff were to vacant positions—except for one half-time teaching position—so the loss of jobs was minimal.

“We can’t keep running up the credit card. Where do we stop with this budget?” York asked.

Those in support of the amended budget did not comment, speaking instead with their votes.

During discussion of Article 17, Oceanville resident Jen Larrabee asked the board to review its calculations to be sure there were no errors that could invalidate the process. Jenkins honored her request, and with the help of attorney Greg Im, of Drummond Woodsum legal firm (which represents the school district), he and members of the school board verified the new budget numbers prior to the vote.

Other warrant articles prompted discussion but did not result in any further amendments.

Article 9 calls for $289,816 for transportation, and Gene Eaton asked for an explanation of the $30,000 increase over the allocation for 2014-15. Jenkins said the administration had anticipated a 4.5 percent increase in busing expenses, but the actual increase came in at 8 percent. The administration is essentially making up for two years of increases, since the estimates fell short the past two budget cycles, Jenkins said, and added programming at the high school—such as the marine studies pathway—required more busing and raised actual costs during 2014-15.

Article 10, recommending an allocation of $792,458 for school facilities and maintenance, prompted a question by Gene Eaton regarding the up-tick in expenses, and Jenkins explained that the planned re-shingling of the second half the high school roof was driving the increase. Stonington Selectman Evelyn Duncan asked the school administration to provide “a really accurate list” of capital improvements.

Articles 13 and 16 concern state requirements pertinent to the Essential Programs and Services Funding Act and the dispersal of expenses as assigned to both towns, respectively, and the earlier amendments necessitated their recalculation, which was performed by Jenkins, Im and CSD Board Co-chairman Skip Greenlaw. Jenkins, moderator Doug Johnson and Im explained that the articles do not authorize additional expenditures. They are “housekeeping” measures that “put money into the correct piles…and don’t determine the sizes of the piles,” Johnson said.

After Im clarified that Article 16 must be passed with some amount in order for the district to be allowed to fund its budget, the adjusted amounts were approved in a 141-70 vote.

As many as 230 people were present at the meeting. 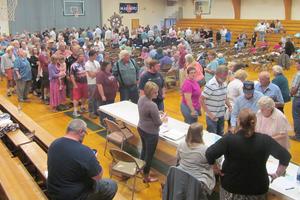 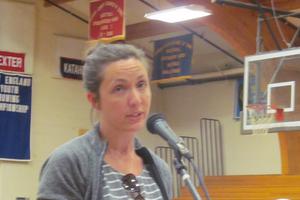 Jen Larrabee asked if the school leadership could double-check its work in calculating the amendments, a suggestion which Superintendent Jenkins called “a good idea.” 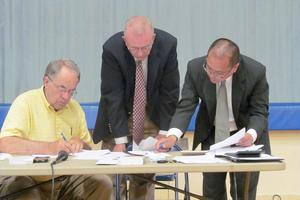 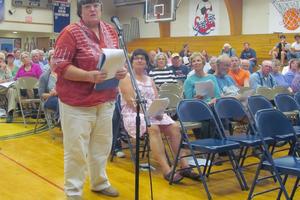 Evelyn Duncan spoke during the meeting. 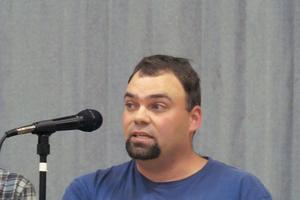 Bill Shepard warned that the tax implications of an increased budget were real. 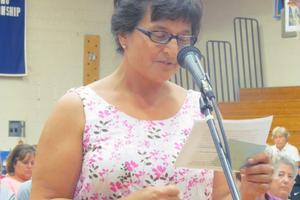