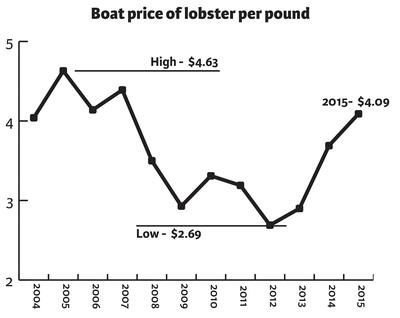 When factoring in bonuses paid to harvesters as reported by 11 of Maine’s 19 lobster co-ops, the overall landed value of Maine’s lobster fishery reached $510,680,048.

While the data shows an overall drop in landed pounds by about three million, a higher per-pound price drove the historically high values. The 2015 price per pound was up 39 cents to $4.09, while pounds landed were 121,083,400, down about 24 million pounds from 2014.

“This past year saw a continuation of steady and historic lobster landings throughout the season. The increase in value reflects growing demand for Maine lobster,” Commissioner Patrick Keliher stated in a March 3 press release.

In Zone C, which includes East Penobscot Bay and the towns of Deer Isle, Stonington, Blue Hill, Brooksville, Brooklin, North Haven, Vinalhaven, Matinicus and Isle au Haut, lobstermen landed 31,578,925 pounds of lobsters for a value of just under $126 million. Per port data on pounds landed was not yet available from the DMR.

For all commercial marine resources, landing values topped $600 million for the first time, with lobster landings accounting for 81 percent.