Click here to see the full Focus on Education 2017 Archive. 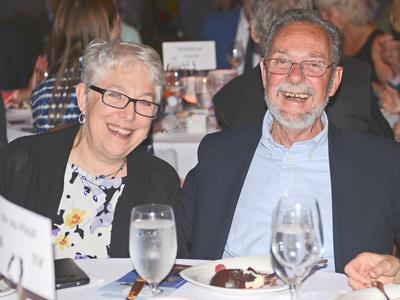 Robin Alden, executive director of The Maine Center for Coastal Fisheries (formerly Penobscot East Resource Center), headquartered in Stonington, has been honored by the Maine Seacoast Mission with its Sunbeam Award. The award was presented at an award gala at the Bar Harbor Club Friday, August 18. “The gala honors individuals for their outstanding contributions to positive change in Maine communities,” according to a MSM news release.

In tributes delivered by MSM President Scott Planting and others from Maine through testimonial videos shown on a large screen, Alden was cited for her vision for fishermen, sustainable fisheries and coastal communities. These attributes coupled with her caring and commitment to bring people together to make things happen to help achieve that and their visions. Alden was cited for her focus on people while building trust through communication among fishermen, scientists and regulators.

As Planting said in his introductory remarks, “Robin knows how to make that vision a reality. Her starting place is the same as Wendell Berry’s: a revival accomplished mainly by the community itself.

“Robin brings people together. She creates opportunities for them to share their knowledge, listen to each other, and act on what they know. It all begins locally. What is so powerful about Robin’s story is the way she brings together the fine-scale observation fishermen have developed so well and the rigorous perspective of scientists, along with problem solving skills of regulators to develop a sustainable fishery.”

With extensive family ties in Maine, Alden moved to the area in the early 1970s then freelance writing for Island Ad-Vantages and covering fisheries issues. Finding a passion for the fisheries, she provided the inspiration for and was co-founder of the monthly publication Maine Commercial Fisheries that later morphed into Commercial Fisheries News, serving as its publisher and editor for 20 years. She is a co-founder of the Maine Fishermen’s Forum held annually in Rockland and served as Commissioner of the Department of Marine Resources under Governor Angus King. Alden has also served on the New England Fisheries Management Council, co-founded the Maine Center for Coastal Fisheries, helped launch the Downeast Fisheries Partnership and Eastern Maine Skippers Program, has and continues to serve on a number of panels and boards of organizations concerned with fisheries issues.

Alden has received numerous awards including, most recently, the 2017 Hero of the Seas Peter Benchley Ocean Award. In 2016 she was recognized for her lifelong career in fisheries by the White House Champions of Change for Sustainable Seafood Award.

She lives in Stonington with her husband Ted Ames and at the end of this year she will retire as MCCF Executive Director.

Two other Sunbeam Awards were presented at the gala. One to Alan Baker, publisher and owner of the Ellsworth American and Mount Desert Islander newspapers and Earl Brechlin, editor of the Islander until the end of the month. Both were cited for their commitment to community and profession. In a tribute to Baker, Senator Susan Collins, who attended the gala, said that the “sunbeam” award is appropriate for Baker because his career as a journalist has been marked by his commitment to “casting light on problems” and “illuminating challenges.”