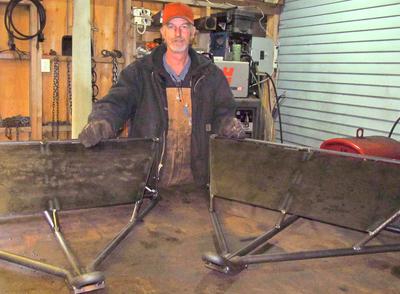 Kevin Grindle shows off some of the drags he has recently built.

The best place to find Kevin Grindle over the next few months is in his home workshop, where the inventor/builder is busy trying to fill orders from scallop fishers purchasing his newest project, a steel scallop drag.

Grindle, who operates under the name Grindle Built, is a second generation shed junkie. His father, Herb Grindle, started building drags in the early 1970s, when the younger Grindle was just 10 years old. Looking up to his father, he soon learned the trades of building and welding. Several decades later, Grindle has found himself the maker of one of the hottest new fishing items around.

“It’s strange how this whole thing evolved,” said Grindle in his workshop on January 4. “I built the first one around this time last year, put it up on Facebook and it sold within three hours.”

That sale, and word of mouth, sparked a frenzy of orders, and Grindle soon found himself making the drags in just enough time for them to go out the door to the fishermen who had purchased them.

“I have three in here right now, and that’s rare,” he said. “Usually I make them and I can’t keep them in here because the guys have already picked them up.”

The drags are roughly 3 feet to over 6 feet and weigh about 80 pounds. The size of them makes them easy for fishermen to move around, while still being heavy enough to drag the bottom floor of the ocean. A longtime scallop fisherman himself in the 1980s and 1990s, Grindle said that while he no longer fishes, making the drags is “the next best way” to stay close to something that brought him so much joy.

“I stopped fishing in the ’90s because the scallops kind of disappeared, but now they seem to be coming back,” he said. “I don’t have a license anymore, but I’ve been able to reconnect with guys I haven’t seen in 30 years, guys I had fished with. It’s been great.”

Once a week, Grindle will make the hour and a half drive to Bangor to pick up steel and supplies from Bangor Steel, cart it back to the island in a trailer and set to work on his orders. Since August of last year, Grindle said he has made about 25 drags, and has already received some orders for 2017.

“There have been times where I’ve been backed up, because I’m doing this all myself,” he said. “But I have orders coming in as far east as Machiasport and as far west as Owl’s Head.”

While building the drags produces an income for Grindle, he said the greatest enjoyment he gets out of building them is the time he spends in his workshop.

“It’s nice to be in the workshop, hearing the crackling of the wood stove and listening to the radio,” he said.

For more information about the drags, visit the Grindle Built Facebook page at facebook.com/grindlebuilt. 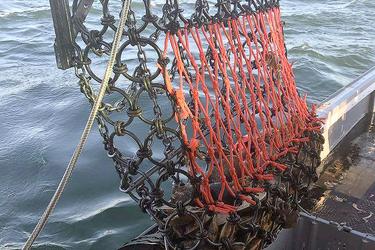 One of Grindle’s scallop drags is used on the water. 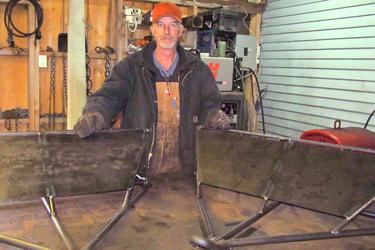 Kevin Grindle shows off some of the drags he has recently built. 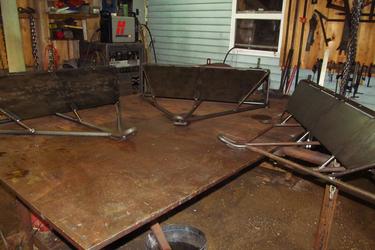 Kevin Grindle has three scallop drags in his workshop waiting to be picked up. 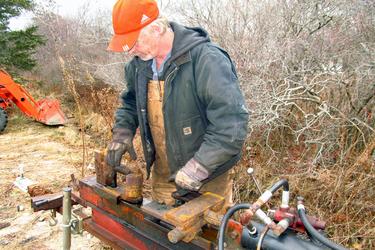 Grindle explains how he uses a wood splitter to bend the steel used to build his scallop drags.