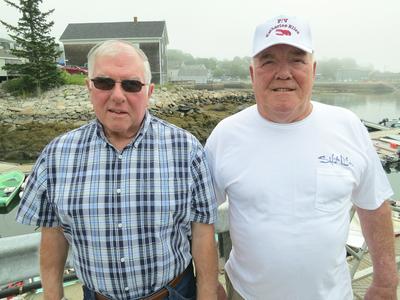 Dick Kent and Dick Bridges were inducted into this year’s Fisherman’s Hall of Fame. John Wallace was posthumously inducted.

Each year the Island Fishermen’s Wives Association inducts members of the fishing community into its Hall of Fame. This year, Dick Bridges, Dick Kent and John Wallace were added. Below are the remarks given by IFWA members during the induction on July 16.

Richard ‘Dick’ Bridges was born in Connecticut in 1945. He was the third child of Melvin and Barbara.

Dick started fishing when he was a young boy of 7. At 9, he was fishing in a herring weir. Dick has gone gill netting, scalloping, shrimping, sardining, hand lining and lobstering, his favorite being lobstering. Dick has been married to his wife, Carol, for 52 years. They have two daughters: Ellen and Katherine. They have six grandchildren: Tyler, Libby, Madigan, Gabriel, Maeve and Isla.

Dick has been an advocate for the industry. He believes in the need for conservation efforts that will ensure future generations will be able to continue fishing. He has been an active member of the Stonington Fisheries Alliance, Maine Lobstermen’s Association, and the Maine Center for Coastal Fisheries.

Dick enjoys being a teacher and mentor, freely passing his knowledge to less seasoned fishermen. He has even taught fishermen from other countries how to improve their fisheries at home. Dick is also a well-known cook of his own harvest. He’s made many lobster stews and other seafood dishes for fundraisers and celebratory events. His recipes have been featured in the New York Times and Yankee Magazine! He takes pride in the opportunities to promote an industry built on family generations.

Dick comes from a hard working family. Hard work is something he is no stranger to. He helped his dad with anything from shoveling bait on a wharf that the family owned to transporting lobsters on his father’s Novi boat and bringing bait back for the Swan’s Island fishermen. At 12 years old, Dick began his own fishing career with a 12-foot skiff with a six horse power motor.

In 1971 Dick married the love of his life, Rebeca “Becky” Heanssler. They lived three months on Swan’s Island. Becky thought that was enough and they soon made Sunshine their home.

Dick went on to build his first boat, a 34’ Repco named the Miss Becky. He fished the Miss Becky for four years then he bought a 36’ Stanley named Deborah Ellen after his two girls. After fishing the Deborah Ellen for 24 years, Dick built his current boat, a 38’ Holland named Copy Cat. The name came from the fact his brother-in-law has the same boat. Dick has been an urchin fisherman, gone scalloping, and don’t forget the crab.

Dick has helped many young guys apprentice for their own fishing license. He has also been a member of the Maine Lobster Association throughout the years.

John was born November 5, 1954 to John “Bug” and Delores Wallace. He grew up in Stonington with his older sister, Jackie. After his Dad passed away when John was 6, they moved to Deer Isle.

John fished for 40 years. He had a love for lobstering and enjoyed scalloping, urching and seining with George Boyce. John was a caring, compassionate fisherman and helped protect the integrity of the industry. His first boat was a leaky old wooden boat that he fought to keep afloat. After a tragic night of the boat sinking, he got his first fiberglass boat, a 30’ Young Brothers from Bobby Bartlett. He fished that boat for 25 years until he got another wooden boat.

John married the love of his life, Carla, in 1973. They have three children, Cindy, John, and Joseph. They have four grandchildren, Julie, Bradley, Zachery, and Brooke.

The opportunity soon arose and he purchased a 36’ Northern Bay and named it after his wife, Carla Jean.

John was a busy man. You could find him and Carla in their flower beds, visiting the residents at the Island Nursing Home, or performing many duties at his Church, St. Mary Star of the Sea. John received an Apostolic Blessing from Pope John Paul II in recognition of his faithful loyalty to his church.