Hagen Dock remains a construction site even though the rebuilt surface has been paved and is again open to traffic.

Town Manager Kathleen Billings told selectmen this week that she hopes to have all of the remaining work completed by the end of this month, but cautioned that the wet weather continues to delay the project.

“The weather has slowed up everything,” she said.

Crews are waiting for the new paving on the dock to cure before painting the lines for parking spaces, but were scheduled to begin that job this week if the weather permits, Billings said.

“We’d like to get that done so cars can park there,” she said.

The town is still waiting for the dock’s new railing to arrive, which raised some concerns. The rebuilt dock includes a walkway along the waterside of the dock and the federal grant the town received to help fund the rehab project stipulated that the walk be ADA accessible and that it include a railing to prevent pedestrians from stepping off the walk and falling into the water.

Billings said she had considered getting Jersey barriers to form a temporary wall along the edge of the dock, but the $6,800 cost put an end to that idea. Instead, crews will likely install a temporary wooden railing along with signs warning people away from the edge.

“This is still a construction zone and we need to make sure that it’s marked that way,” she said.

The railing will include a break near the Maine Center for Coastal Fisheries (formerly Penobscot East Resource Center) to provide access from the dock to the MCCF building. The break was included in the design after the center’s representatives raised concerns that the railing would block access, forcing pedestrians to walk the entire length of the dock and then back up Atlantic Avenue to get to their building. Selectmen last month inspected the location and agreed to make the change.

The new lighting and the plantings also need to be installed, but Billings noted that both those projects are also dependent on the weather.

In other action on Monday, selectmen agreed to join Age-Friendly Communities initiative sponsored locally by Healthy Peninsula to support a regional effort to improve resources for people aging in place. Stonington joins eight other towns on the Blue Hill Peninsula in the network which also includes more than 30 communities in Maine.

Ann Schroth of Healthy Peninsula explained that the program is being designed to extend the services provided through the Thriving in Place program. Funding for that program ends this year, Schroth said, and the organization is looking for ways to “continue the services and keep the activities going.”

The regional Age-Friendly project is being funded initially through a grant from AARP which, Schroth said, will support a community survey to assess each of the nine peninsula towns and identify specific “gaps’’ or needs in each town. Those needs, she said, would be met by new and existing partner organizations that have been working through the Thriving in Place program.

Selectmen raised some concerns regarding the cost involved in joining the new effort, but Schroth assured them that the town was not committing to providing funds for the programs. The commitment from the town, she said, is to promise to work to make the town a great place to live for people of all ages.

Also on Monday, the selectmen voted to spend $5,800 to replace the computer in the large International truck and to improve the parking area at the town’s Holt Mill Pond property. Billings said they will also add signs directing people to the town property and work with an adjacent property owner who has complained about hikers crossing onto her property. 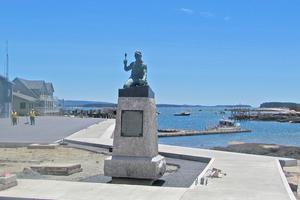 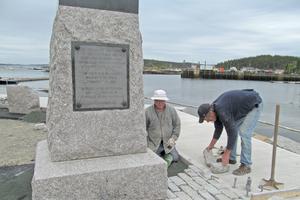 Crews from Mainescape in Blue Hill place individual stones around the Stonecutter monument on Hagen Dock.