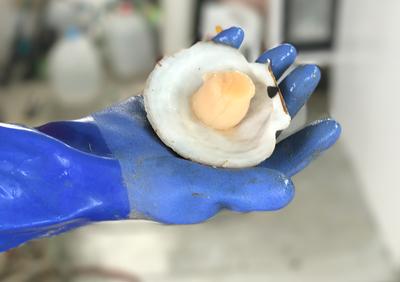 Just about one year after father-and-son fishermen Marsden and Bob Brewer returned from Japan, where they learned new scallop-farming techniques firsthand, Bob Brewer was granted a 3.23 acre experimental aquaculture lease southwest of Andrews Island. It is the first scallop farm of its kind in Penobscot Bay.

The Brewers can grow up to 200,000 Atlantic sea scallops using lantern nets, where mesh nets, each 10 floors deep, hang from a 600-foot longline.

“It’s a big circular tube with floors,” Bob Brewer said. “They’re used in Japan. That’s where we learned how to do it.”

Brewer grows the scallops from seed, caught in spat bags while he and Marsden are out lobstering.

While wild scallops must be a minimum of 4 inches long to sell, farm-raised scallops can be smaller, “princess-size scallops,” said Maine Sea Grant associate Dana Morse, who assisted the Brewers on four 400-square foot limited purpose sites. There, they first experimented with growing scallops in cages before switching to the lantern net method in May.

“Marsden, Bob and I have been working together for quite some time,” Morse said.

The Brewers were also assisted by Maine Cooperative Extension, and are on the ground floor of the recently formed Maine Aquaculture Co-op, which helps scallop growers throughout the state find buyers beyond local customers. The Brewers’ first scallops will be ready for market within the next two weeks, Bob Brewer said.

Maine fishermen first began experimenting with farming scallops about five years ago but have just recently turned to the lantern nets and another Japanese method, called ear-hanging, where a small hole is drilled in the shell when the scallop is about 2.5 inches. It is then hung from the line as it grows larger. Early indications forecast a good yield from the Japanese methods, Morse said.

But Brewer said their scallops have not reached that size yet, and the lantern net technique is working well.

“You got to do this part before you do the ear hanging,” he said.

The experimental lease, which runs for three years, costs $100 per year plus a $5,000 performance bond.

Brewer currently has two 600-foot longlines suspended 15 feet below the water at mean low water, and will likely add a third, he said. Each line can hold a maximum of 100,000 scallops in the lantern nets.

The Maine Department of Marine Resources findings of fact determined that the lease will not interfere with navigation, as it is surrounded on all sides by more than 600 feet of open water, and noted one single-trap lobster buoy within the site. The sole riparian owner is Maine Coast Heritage Trust, owner of the undeveloped Andrews Island, which is 600 feet northeast of the proposed site. The lease prohibits commercial and recreational fishing within the site because of the danger of gear entanglement, but permits recreational boating.

The Brewers have plans to expand their scallop farm, and Bob Brewer said he’s excited about the future and the different growing methods. 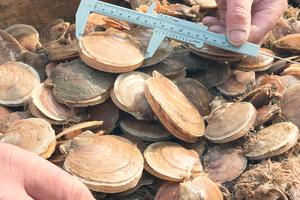 Farm-raised scallops do not have to meet the 4-inch size requirement of wild scallops. 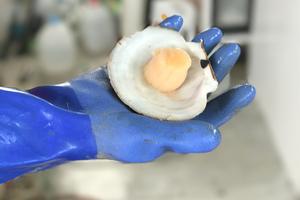 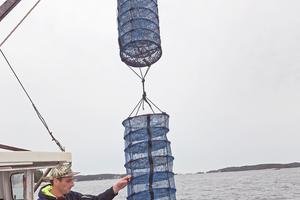