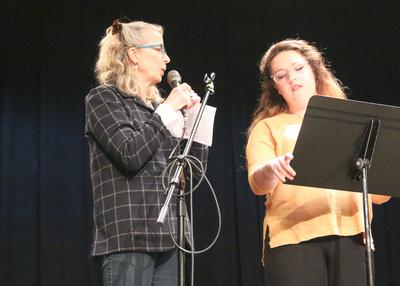 Storytelling, an oral tradition that spans thousands of years and across nearly all cultures, came to the Opera House January 18 in one of its more modern forms.

Based on the MOTH: True Stories Told Live movement, eight Island woman stood in front of more than 135 friends and neighbors and told a story from their own lives, an intimate act that each had to weigh and balance beforehand.

“I went back and forth, and landed on something that was personal, but not breaking privacy,” said Asia Eaton, 21, who spoke about leaving home for the first time, for college, and her grandmother’s death at the end of her freshman year. “It’s a fine line, I find.”

The women represented eight decades of life, with Asia the youngest and Cherie Mason, in her 90s, the oldest.

Producer/director Debbie Weil used her own experience as a performer in a women’s storytelling event in New York to create Island Women Speak, which was received by an audience that filled the Opera House Arts theater.

But before the audience arrived, the women ran through an abbreviated dress rehearsal, speaking the first lines of their five-minute stories as Weil and OHA producing artistic director Meg Taintor worked with them on where to stand, how to exit the stage, how to raise or lower the microphone.

“To be fair, I’ve done a lot of theater,” 37-year-old Morgan Witham said. But this time she was “not telling someone else’s story,” but her own.

For Jennifer Eaton Larrabee, at nearly 40, her delayed reaction to the idea of performing her story on stage was: “Oh, hell, no, I got to get out of this.”

Katy Rinehart, 64, said she found the writing part easy but “the thought of performing what I was writing terrified me,” in part because her story, about falling in love and moving to the Island, involved so much about her husband Herbie Carter.

Eighty-five-year-old Anne Burton was more blunt during the warm-up to the performance: “I’m glad I’m perfecting this—I’m ready to vomit.”

What all the women agreed on was that they were “excited to hear the stories of women of all ages throughout the Island,” as Asia summed up.

“This is an amazing group of women,” Jennifer added. “The variety of age was magical.”

Of her effort to find women willing to speak about their lives, in public, in front of an audience of acquaintances, friends and neighbors, Weil said, “A lot of people said no.” But more than a few of the present performers said they allowed Weil to do a little arm-twisting and eventually agreed.

“I’m kind of nervous because I’m coming out with some things that are hard to say,” Debbie Little Wyman, 72, said. “But I feel I have to say them.”

Her story, about “the power of saying yes and what that opens up” parallels the eight women who said yes to Weil. Sitting in the audience seats, adjusting hair and scarves, reviewing their stories, and chatting quietly, the women slowly prepared to step on stage and speak in public in a real, personal way.

“I have no problem talking, everyone knows that,” Kathleen Billings, 55, noted, and the ensuing laughter seemed to lessen the nervousness.

Afterward, Weil said the event was such a success in part because of the eight “amazing women” and their stage presence but also “the combination of local performers and authentic stories.”

Stay tuned for a second storytelling event—Weil said she may plan one for late spring. 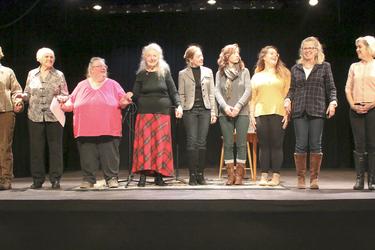 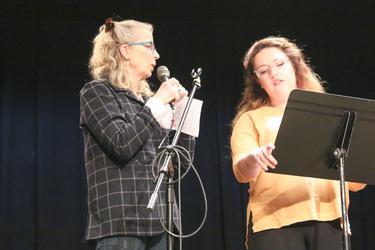 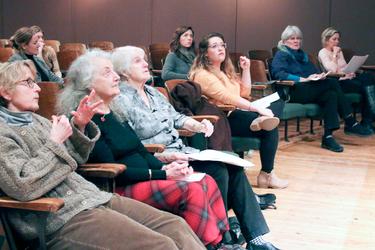 The performers view the stage from the audience’s perspective, discussing where the microphone, stool and stand should be placed. 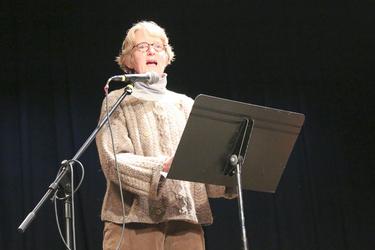 Debbie Little Wyman tells of how saying “yes” opened up possibilities in her life.