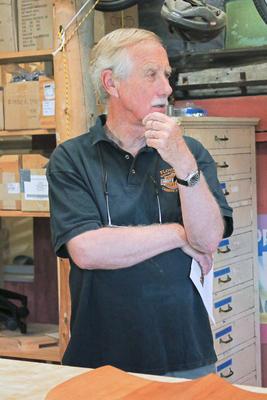 Planned tariffs from China on American exports will hit Maine’s lobster industry hard if they are imposed, according to Angus King, United States Senator from Maine.

King spoke about the tariffs Monday, July 2, during a brief, but wide-ranging conversation with Stonington selectmen during their regular meeting. The senator had spent most of the day on the island meeting with town officials and business people, including those in the town’s signature industry—lobsters. His visit was part of a boots-on-the-ground trip to Maine which was scheduled to take him farther Downeast ending in Eastport for the Fourth of July.

The proposed 25 percent tariff on lobster exported to China is part a retaliatory package on a wide range of U.S. exports levied in response to President Donald Trump’s tariffs on Chinese exports to the U.S.

Those tariffs, set to go into effect this week, will have a devastating effect on the Maine lobster industry, King said, especially coming on the heels of a free trade agreement between Canada and the European union that eliminates Canada’s tariffs on lobster.

The EU imposes a tariff of 8 percent on live U.S. lobster and 16 percent on processed lobster.

“We’re already seeing a big loss in sales to the EU,” he said. “And now China will retaliate with 25 percent.”

The EU and China account for about 30 percent of the state’s lobster exports, King said, noting that they both have options to buying lobster from Canada.

“They don’t have to stop eating lobster, they can just stop eating our lobster,” he said.

Selectman Travis Fifield who works at Fifield Lobster, his family’s lobster dealership, echoed King’s concerns about the tariffs. Fifield said he is worried that the tariffs will hurt not only his business, but the lobster industry in Stonington—the state leader in lobster landings.

“It’s kind of scary,” he said. “We don’t export lobster, but a lot of the people we sell to do export. The fishermen don’t export directly, but you know this is going to hurt them too.”

Fifield said he is also worried that Canada could impose tariffs on lobster in retaliation for U.S. tariffs on Canadian products.

“A big percentage of our shedders goes to New Brunswick,” he said. “If something happens to that relationship, it’s going to be a bad thing for everybody.”

King criticized the President’s use of the tariffs noting that his claim of national security as justification for the measures was “a bit of a stretch.” There is a growing consensus in Congress among both Republicans and Democrats, he said, that they need to rein in the president. King expressed support for a bill submitted by Sen. Robert Corker, chairman of the foreign affairs committee, that, he said, would require the President to get Congressional approval for the kinds of tariffs he has imposed on his own.

“That’s the tack we’re looking at now,” he said.

The senator’s brief discussion with selectmen ranged from broad band and herring quotas to the opioid crisis and his vote on the presidents’ nominee for the U.S. Supreme Court. Selectman Evelyn Duncan urged him to hang tough during the confirmation hearings once President Trump has nominated a candidate.

King said the vote on the Supreme Court nominee could be the most important vote he and his colleagues make because “it’s going to last 40 years.”

He said he felt that with a cabinet nominee, the President should have whoever he wants on his team as long as the nominee is not “hostile” to the agency he or she will head.

“But, for the Supreme Court, it’s different,” he said. “That’s a lifetime job. There’s no re-do. This goes way beyond this president and me, and I think that demands a higher standard.”

King added that he would “dig in and see if it’s the right person for the country and for Maine.”