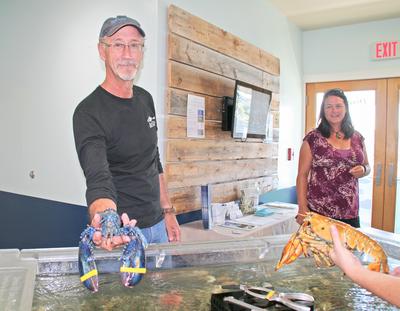 Tom Duym displays a blue lobster from the touch tank at the Maine Center for Coastal Fisheries, where he will be overseeing educational programming for the public, in addition to being the liaison for the Eastern Maine Skippers Program.

After 17 years as the Marine Trades teacher for the Deer Isle-Stonington High School, Tom Duym is moving on to a new challenge. But the popular teacher will not be going far, and students will still benefit from his deep knowledge and experience in the marine trades. Duym recently accepted the position of Fisheries Education Specialist with the Maine Center for Coastal Fisheries in Stonington. In his new role, he will oversee educational programming for MCCF, and be the liaison for the Eastern Maine Skippers Program—a program he helped envision and design.

The Skippers Program was launched in 2013 as a way to engage high school students who planned to fish after graduation. The curriculum offers courses that are relevant to the fishing life, and combines them with experiential learning and mentorships. The goal is to help students develop a broad set of skills to be successful in an industry that is increasingly facing complex challenges, and that requires collaboration with scientists and regulators to co-manage the resource. The program is offered in partnership with the Rural Aspirations Project and is housed and managed at MCCF.

For Duym, “it just seemed like the right time” to make a change. “The program made a lot of progress in the last five years, but there is room to take it further,” he said. The Skippers Program is offered in nine of the 12 high schools in a 200 mile stretch across Eastern Maine, with more schools expected to join in the coming year.

Duym says his main focus will be to act as a resource for teachers and students to make sure their needs are being met. He will also be working to strengthen community connections for the program, to help people understand the value it brings to coastal communities.

“Students who plan to fish after graduation are an important part of the high school population because they represent the continuation of the industry, which is important to the economy and sustainability of the community,” said Duym. The goal of the program is to “work with, celebrate and support students who want to pursue occupations that will bring them back to the community,” he added.

One of those former students is Patrick Shepard, who is now a Sector Manager at MCCF. “I grew up in a fishing family and I knew I wanted to do something related to the industry. Tom opened my eyes to the fact that there’s a lot more to the fishing industry than just fishing. It’s such a cool opportunity to now work alongside Tom in his new position, tackling some of the tough issues facing our fishing community together,” said Shepard.

At Deer Isle-Stonington High School, Duym’s former position will be filled by a combination of talent that includes veteran teacher Kim Larsen, who will play a consulting role by supporting and guiding Amber Jones, who will deliver programming to the students. High School Principal Dennis Duquette, said the two have been busy designing the curriculum and classroom, and that “the place is alive with excitement.”