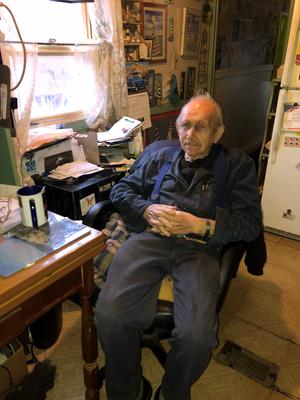 Stanley Joyce sits at his work table in his home where he did paperwork for his one-man garbage disposal business for over 50 years.

For 53 years, Stanley Joyce has left his house every day, driven up and down the island in sun, snow, rain or wind, and collected the garbage of Deer Isle and Stonington residents. Now, at the age of 76, he has traded in that life for one of retirement.

“I wasn’t planning on it, but the truck wasn’t going to pass inspection again, and I thought real hard about the next few years,” said Joyce while sitting at the table that served as his work station in his home on Sunshine Road. “I could’ve gotten a new truck no problem, but my body isn’t what it used to be, and if I were to fall or something things could get bad quick.”

Joyce got into the garbage pickup business in his 20s, taking over the business from his uncle Vaughn after his cousin was killed in a car accident. Joyce immediately got to work, but said the job was not one he envisioned as long term.

“I thought this would be good until something better came along,” he said. “That was over 50 years ago, so I guess nothing better ever did.”

Joyce spent the next five decades making relationships with his customers, proving his strong work ethic by showing up in the best and worst of weather conditions, even if he was not feeling well himself.

“There were days when I was sick, but I went out anyway,” he said. “I was taught at a young age that you need to get the work done, no matter what.”

His consistency was coupled with punctuality, according to the feedback he got from his customers.

“Some people said they could set their watch by me,” he said with a chuckle. “I almost always showed up at the same time.”

Joyce said his father instilled a “work hard” attitude in him as a boy, and said that both his parents worked very hard to provide for their family.

“Growing up, we didn’t have much, we had food in our stomachs and we were warm, but my parents worked their tails off to give us what we had,” said Joice. “That always stuck with me.”

The fact that his uncle passed down the garbage business without a single cost has also stuck with him, and Joyce has decided to pay it forward by giving the one-man operation to Jeff Cobb, who has done a garbage run for Joyce for a few years.

“There’s a lot of potential in this business, more than what I might have been able to do, and I think it will be a good fit,” said Joyce.

Now two weeks into retirement, Joyce said it has been an adjustment to slow down and not hop in his truck every day to collect the garbage. With a retirement gathering planned for December 15, he has struggled to come to terms with the well wishes, cards, and words of encouragement and gratitude he has gotten since he decided to retire.

“I don’t feel worthy of that,” he said. “To me, I got up in the morning and did my job, nothing more, nothing less. It’s just what I did.”

The party is scheduled for 3 p.m. at the Deer Isle Town Office.