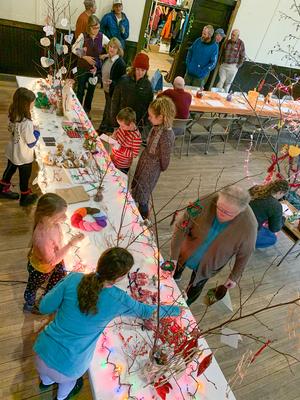 Students of the one-room schoolhouse on Isle au Haut sell their homemade crafts to raise money to adopt puffins during a craft fair on November 22.

The six students in grades kindergarten through six at the one-room schoolhouse on Isle au Haut received an early Christmas gift last month. The students raised enough money to adopt six live puffins through the Puffin Project out of Rockland.

Each puffin came with a price tag of $100, and teacher Marcela Carroll and her students came up with the idea to raise $600 by making holiday crafts and selling them during a Thanksgiving luncheon at the town hall on November 22. Each student created items such as holiday cards, refrigerator magnets, ornaments, bracelets, dog treats and more, and also made a poster advertising the event which Carroll hung around town.

The idea for puffin adoption came when Carroll visited the Project Puffin Visitor Center during a conference with the Island Institute.

“I grabbed enough literature and brochures from the center for every student. I shared that with them and when they read the ‘adopt a puffin’ section of the brochure, they were excited and determined to raise [the money],” she said.

The small Isle au Haut community rallied behind the students, as the proceeds from the craft fair were enough to adopt all six puffins at once.

“I encouraged the community to come out and support our students,” said Carroll.

With each adoption, the students will receive a certificate of adoption, a detailed biography of their individual puffins, including their behaviors, nesting and eating patterns and other information, and a Project Puffin book.