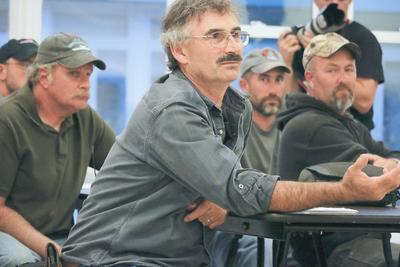 Deer Isle carpenter Walter Kumiega represented District 134—Deer Isle, Stonington, Isle au Haut and eight other communities—for eight years in the state legislature before becoming ineligible for re-election under state term limits for legislators. He dipped one foot into the 2018 state senate race for District 7, but instead threw his support behind fellow Democrat Louie Luchini, who prevailed in the general election. That willingness to continue to serve shows Kumiega’s tolerance for the legislative process and, at times, his enjoyment of it, too.

“Some of the most satisfying moments were when we stayed [in session] until two in the morning to get everything done,” he said. “Things take a long time, there’s a process that’s there for a reason. One of my frustrations was legislators who don’t take the time to learn the process and sit in chambers complaining about how long it takes to get things done.”

Kumiega said he learned to focus his effort. “You learn what may be possible, [to] be more realistic on what you may be able to accomplish. … If you can move the rock up the hill a couple yards, be happy with that.”

With commercial fishing communities “still the most important economic driver in my district,” Kumiega immediately joined the Joint Standing Committee on Marine Resources, chairing it for his final three terms. Throughout his tenure, he worked to initiate changes in lobster licensing regulations and sponsored legislation creating the Maine Lobster Marketing Collaborative, funding for which was recently renewed for a second three-year span.

“Going in, I didn’t know how much of an effect the legislature has on the fishing industry,” he said. “I learned that there are a lot of other factors,” such as the Atlantic States Marine Fisheries Commission, which Kumiega served on for two years, and the New England Fishery Management Council, both of which take precedence over individual states. “That was an eye opener,” he said.

Kumiega learned the importance of working in committees, of having bills co-sponsored and of organizing public comments at hearings on proposed bills, of “getting people to come in and tell their story.”

But over the last three or four years, he saw “some breakdown of bipartisanship. There was more head-butting. What’s really important is that the four leaders—of each caucus in the House and Senate—and the governor need to be willing to sit at the table and talk for as long as it takes to figure out a solution. That’s what we didn’t have. It happened at times but it should have been just the way things were done. [Governor] LePage rarely sat down. When he did, the conversation often took a turn where people got up and left.”

Because of this, Kumiega said, “it became commonplace for us to pass joint resolutions recalling a bill from the governor’s desk to address his issues that should have been done in committee.”

Vetoes to Medicaid expansion and the lack of the outgoing administration to raise revenue for rebuilding roads outside of multi-million dollar bonds are two issues that Kumiega said he found frustrating.

“Something has to change,” he said. “There’s just not enough money in the highway fund to fix the roads. Voters know how bad the roads are and happily support transportation bonds. That’s not the way to handle roads.”

For Medicaid expansion, the legislature was “within a vote or two on a couple of occasions” of overriding a governor’s veto “and didn’t get it done. Then the voters did it and the governor still dragged his feet, which is doubly frustrating,” Kumiega said. “You so often see poverty and poor health go hand in hand. With the economy now, if you’re healthy, you can get a job. But there’s a lot of people not healthy enough to work full-time and can’t afford to get [healthy].”

Kumiega may no longer work in Augusta but he still is involved in public service. A self-employed carpenter from Deer Isle, he is involved with the Maine Center for Coastal Fisheries, the Deer Isle-Stonington Chamber of Commerce, and Downeast Community Partners.

His eight years in Augusta were “interesting, very interesting,” he said. “If you have any thoughts about running [for the legislature] in the future, go to Augusta, check it out, and learn about it before you say yes or no. The worst case scenario is you learn something and decide not to do it.”