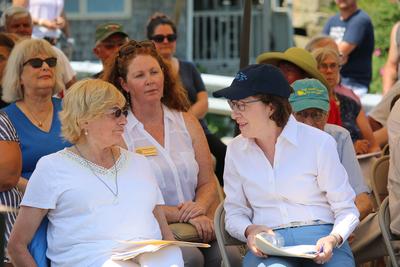 A rally designed to draw attention to impending federal regulations that would strike a big blow to the local lobster fishing industry drew hundreds of fishermen, their families and supporters from up and down the coast to the Stonington Commercial Fish Pier.

“It’s important,” Eaton said, as people streamed to the fish pier from land and water. “Our voice matters.”

The National Oceanic and Atmospheric Administration, or NOAA, has proposed regulations to reduce trap lines by up to 50 percent to prevent entanglements by North Atlantic right whales, a federally listed endangered species since 1970.

But hundreds of Maine lobstermen signed a petition at the rally declaring they had never seen a right whale in the Gulf of Maine.

“It is now time for NOAA to listen to you,” Sen. Collins said, promising, with the rest of the delegation, to press President Trump to address the new rules. The Maine delegation has already written him asking him to intervene in the implementation of the new regulations.

Members of the political delegation learned more about the science behind lobster fishing and right whales at the Maine Center for Coastal Fisheries before arriving at the rally.

Warming ocean waters have turned right whales in search of food northward from the Gulf of Maine, to Canada, and right whale entanglements with trap lines are overwhelmingly in Canadian waters, Collins said she’d learned. There have been six reported right whale deaths in Canada this year, and no reported entanglements in Maine waters for the last three years.

“Food for right whales is increasingly not ever found in waters where Maine fishermen are fishing,” Collins said before taking the podium. “Particularly at the depths lobstermen lay their traps. It just doesn’t make sense to me.”

The new rules come at a time when the lobster industry is dealing with a changing market and bait shortages, something Governor Mills addressed.

“These issues are difficult enough without the heavy hand of federal government trying to make life even harder for you and your families through misguided regulations, ones not even supported by data,” Mills said. “Maine’s lobster industry is a critical pillar of our state’s economy and it’s that way because of your hard work and that of generations before you.”

Congressman Jared Golden, the last to speak, has been speaking with local lobstermen and bringing their issues to Washington, D.C., earning him the nickname “Captain Ahab” on the House floor, he said.

“There’s no better voice about why it is that we truly believe, from the bottom of our hearts, that Maine lobstermen are not a part of the problem when it comes to the right whales than yourselves,” Golden told the lobstermen. “You’re the best advocates for yourselves.” 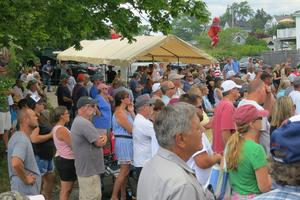 Close to 500 lobstermen, their families and friends came to Stonington to attend the rally. 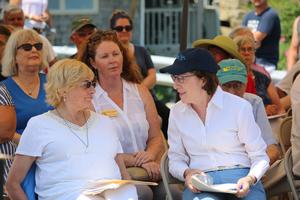 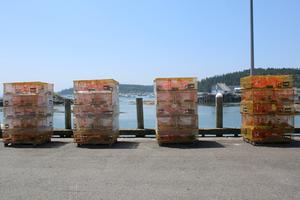 Under new rules facing the lobster industry, the number of traps on a trawl line, could increase, raising safety concerns. 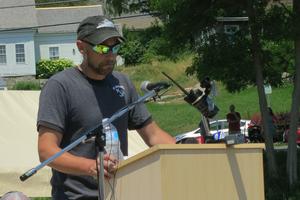 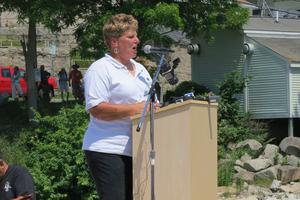 Captain Julie Eaton, who organized the rally, speaks to the crowd. 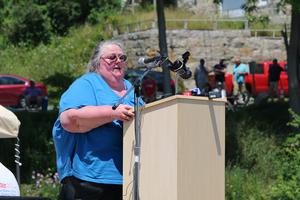 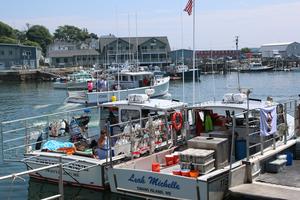 Lobstermen arrived by boat from island fishing communities up and down the coast. 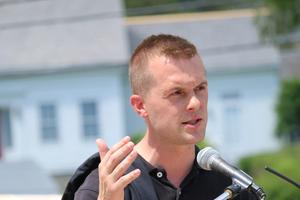 Congressman Jared Golden tells lobstermen they are their own best advocates. 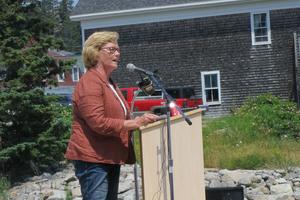 Representative Chellie Pingree at the podium.