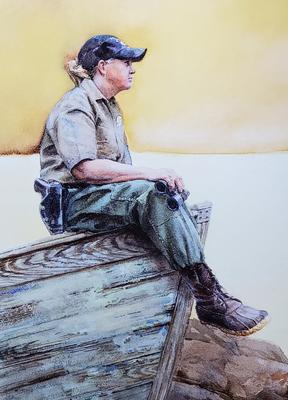 This watercolor portrait of Jodi Mosher is featured in “We the People,” Veterans in America, an exhibit by artist Mary Whyte.

When Coast Guard veteran Jodi Mosher met artist Mary Whyte in 2012, she was sitting in the harbormaster office in Stonington filling out paperwork, unaware of who Whyte even was. Now, seven years later, Mosher is featured in one of Whyte’s exhibits in Charleston, South Carolina, titled “We the People,” Portraits of Veterans in America.

“When [Whyte] walked into the office, Harbormaster Steve Johnson and I looked at each other thinking the same thing; here’s another lobster tourist,” said Mosher.

Whyte explained to Mosher and Johnson that she was on a nationwide search for veterans, with the hope to paint one veteran from each state as part of what would become the exhibit. Both Mosher and Johnson pointed to each other as veterans, and Mosher went on to name several lobstermen who were veterans and possible options.

“I went back on the road to continue work, but had to come back a couple hours later to sign more paperwork,” said Mosher. “She came back and said that she would like for me to be her subject. I agreed after she told me the exhibit would be about being a veteran and acclimating back into the world.”

After getting written approval from her superiors, Mosher and Whyte went out on the water in a patrol boat, where Whyte took several photos of Mosher to use as a guide for the portrait. Mosher told her about her job as a Maine Marine Patrol Officer, about her past experiences as an EMT and member of the military, and other things she had been through.

An artist in her own right, Mosher said it has been a humbling experience to be a part of such a large exhibit.

“It is humbling that someone would seek out and find, and want to paint me as one of 50 veterans to be immortalized on paper by watercolor,” she said. “It’s hard to grasp. I’ve always done for others and not myself, After serving 20 years in the Coast Guard and another 20 years in the Marine Patrol, you can do so many great things and not get any recognition. This totally makes it real, like I counted for something.”

Mosher was forced into retirement a few years ago, suffering a career-ending injury while on a search case. The injury resulted in the development of Post Traumatic Stress Disorder for Mosher; however, she has started to find other passions and outlets, including cemetery research and documentation in the Deer Isle and Stonington communities.

“[Doing this] makes sure that no one is forgotten, dug up, or built over,” she said. “It helps respect and give a voice to those who no longer have one.”

For Mosher, Whyte’s exhibit also gives a voice to veterans. Each portrait is of a person with a different background, from a different walk of life with a different story. Her hope is that it will reach civilians and veterans alike, and that their stories will impact their communities for years to come.

“Follow your dreams, and make it happen, no matter who or what you are,” said Mosher. “We are all equal.”

The exhibit is on display at The City Gallery in Charleston, S.C., until December 22. The watercolor portraits have also been put together in the form of a book. 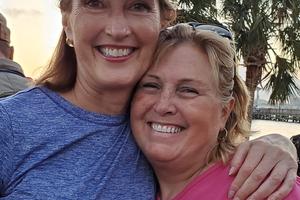 Artist Mary Whyte, left, chose Jodi Mosher to be a subject in her exhibit featuring 50 veterans from around the country. Mosher represents veterans from Maine in the exhibit. 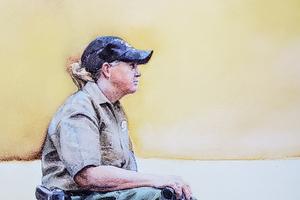 This watercolor portrait of Jodi Mosher is featured in “We the People,” Veterans in America, an exhibit by artist Mary Whyte.