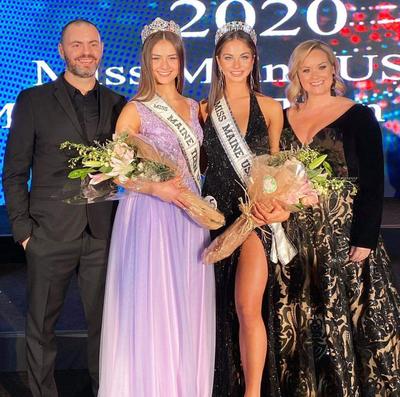 Grace Morey, a Deer Isle resident, described her emotions after the 2020 Miss Maine Teen USA crown was placed on her shining hair.

“There were not a lot of tears on stage but a lot when I saw the motorcade,” she said, referring to the community celebration honoring her Monday evening. “Incredibly grateful is how I felt.”

“To all those who always show me nothing but kindness, love and support, thank you,” she conveyed early Tuesday morning. “I wouldn’t have been able to step up on that stage without you.”

This was Morey’s second year competing in the pageant, and the results were a step up. In 2018, she was named the People’s Choice, through online voting.

She entered the competition as an avenue to speak out and raise awareness on climate change.

“When I was younger, I cried myself to sleep every night over what I saw on the news,” she said. “[I thought], I’m only one person.”

Morey advanced from the preliminary round on November 9 to the finals the following evening in South Portland, where judges awarded points based on a personal interview and modeling active wear and an evening gown.

The Deer Isle-Stonington High School junior had signed as a model for Rebel Athletic in August.

As Miss Maine Teen USA, Morey will compete for the national title this spring, at a time and place yet to be set, but “I’m actually starting [training] right now,” she said.

Before then, she will honor her Miss Maine Teen USA appearance commitments and continue with her academics and cheerleading.

“If nothing else, I hope my crowning inspires someone to chase their wildest dream,” she aid. “It doesn’t matter where you come from. An island off the East Coast, a city with tens of thousands of people. Whoever you are, determine your wildest dream and chase it. Chase it like there’s no tomorrow.”