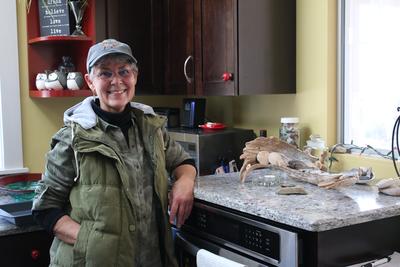 Alice McDonald creates all of her Fox Den Delicacies items in her home kitchen on Oceanville Road.

When it comes to her home, her baking, or life in general, Alice McDonald does not do anything by the book.

“Many of my customers, after eating my food, tell me I’m the most eclectic person, and I take that as the biggest compliment,” said McDonald.

McDonald is the owner and operator of Fox Den Delicacies, a baking business she opened in the fall of 2017. While her passion lies in the rich chocolate brownies and her own creations of English muffin bread and tart-POPS, it has taken a journey across the eastern seaboard to attain a lifelong dream.

McDonald came to Maine for the first time in 1989. As soon as she crossed the bridge onto Deer Isle, she said her soul felt at home.

“I just knew,” she said. “My entire being felt alive.”

It would take over 20 years to make her dream of living on Deer Isle a reality, but in 2012, with her daughter Kira in tow to begin college at College of the Atlantic in Bar Harbor, she took a job as a nurse at the Island Nursing Home and began her life on the island.

In 2017 McDonald retired from nursing, and took up a gardening job for a couple down the street from the home she built, by hand, on Oceanville Road. The time in the garden provided McDonald an outlet to think creatively for “the first time in a long time,” she said, and that was when it hit her.

“I overwhelmingly decided that it was time to start the business plan I’d had in my back pocket for years,” she said.

That business plan evolved into Fox Den Delicacies, a business McDonald operates out of her home kitchen and garage. Her baked items, which include everything from sticky buns to banana bread to scones and, most recently, cake-batter donuts, are all made from scratch, using recipes passed down through generations of women who have inspired her.

“My Grammie Owen could make anything, and my Aunt Bernice was the best cook and baker. And of course, my mother was incredible,” she said.

While McDonald creates sweet treats daily in her kitchen, she admitted she is not one with a sweet tooth.

“I can just taste it in my head,” she said with a laugh. “I can taste the textures and flavors while I’m making it.”

She also has “two trusted taste testers,” she said, in her partner Reggie Nevells and her daughter Kira.

McDonald’s products feature local ingredients as best she can, she said, the most notable being confections from Nervous Nellie’s Jams and Jellies, where she is also the head baker during the summer season. McDonald uses the jams in several of her creations.

Now in her third year, McDonald has a weekly spot at the Mainescape Winter Market for the past two seasons, as well as the Stonington Farmers Market and the Brooksville Farmers Market this past summer. As her presence in the community has grown, so has her business, and she said she receives several special orders, including for weddings. Her clientele includes people from across the Blue Hill Peninsula, from Castine to Stonington, she said.

McDonald will be at the Island Community Center Holiday Fair this Saturday, November 30, with several items in tow. 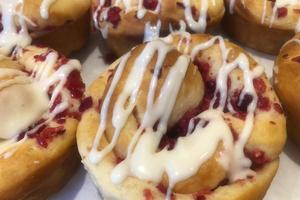 The cherry-cranberry breakfast roll, made by Alice McDonald, is a sweet option for the breakfast table. 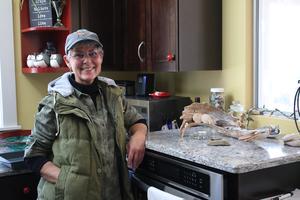 Alice McDonald creates all of her Fox Den Delicacies items in her home kitchen on Oceanville Road. 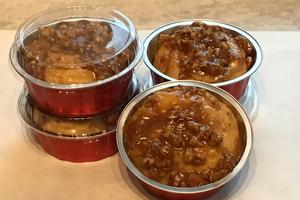