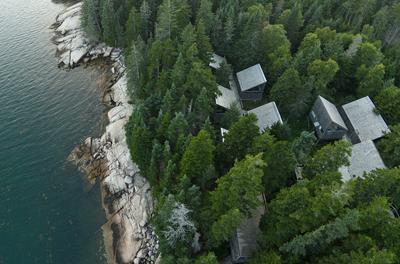 The Haystack campus will be the beneficiary of a $4 million endowment for its perpetual care.

The Haystack Mountain School of Crafts recently announced a major gift of $4,000,000 from the Windgate Foundation to establish an endowment for campus preservation. This is the single largest gift in the history of the school, according to a news release from Haystack.

American architect Edward Larrabee Barnes (1915-2004) designed the campus on Deer Isle, which opened to the public in the summer of 1961. The architectural plan situated a series of modest structures on a granite ledge overlooking the Atlantic Ocean. The structures, built in a vernacular style with local materials, are connected by a series of walkways that encouraged community, while seeming to float above the forest floor. Barnes’s project for Haystack quickly gained attention, and over the years would become recognized as an architectural masterpiece and an icon of American modernism. While Barnes went on to design other notable buildings, such as the Walker Art Center in Minneapolis and the Dallas Museum of Art, he would often refer to Haystack as “one of my happiest projects.”

In 1994, Haystack was awarded the coveted 25-year award from the American Institute of Architects, in recognition of its buildings having retained their integrity, having set standards of excellence for architectural design, and having attained cultural significance. The Haystack campus is one of only 49 buildings to receive this recognition. Others include the Solomon R. Guggenheim Museum (N.Y.), the Gateway Arch, St. Louis (Mo.), and the East Building, National Gallery of Art, Washington, D.C. In 2006 the campus was added to the National Register of Historic Places. Writing about Haystack, Robert Campbell, architecture critic for The Boston Globe, described the school as “so perfectly fitted to its site and its purpose that you never afterwards forget it.”

“We are proud to be the stewards of this architectural legacy and believe it to be one of the defining characteristics of the school,” stated the release. “The human scale of Haystack is integral to the way we teach and learn, and rather than developing plans for expansion, we are committed to maintaining the intimacy of Haystack and the delicate relationship it has to the surrounding landscape.

As an endowment gift, these Windgate Foundation funds will be permanently restricted, generating annual operating support for the ongoing preservation of our award winning campus.”