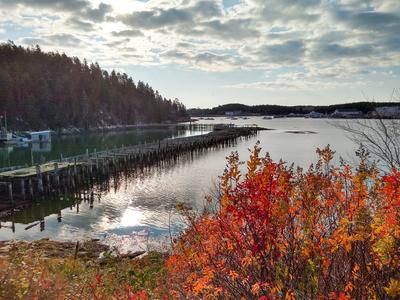 A view of Greenhead Lobster’s lobster pound just before the causeway to Moose Island. Lobstermen and industry stakeholders heard details of a plan to reduce whale entranglement risks November 4 at The Grand in Ellsworth.

Department of Marine Resources Commissioner Pat Keliher faced a half-filled auditorium of lobstermen and other industry stakeholders at The Grand on Monday, November 4. The topic, once again, was how to meet a federally mandated rule to reduce the risk of right whale entanglements by 60 percent, as it was at a NOAA-led meeting in Ellsworth August 13.

At both meetings, local lobstermen pushed back against federal regulations for reasons including safety and their own livelihood in the $565 million per year fishery, of which Stonington is the highest grossing port.

However, on Monday, Keliher, using feedback from that summer meeting, drafted a plan that differs by having lobstermen “trawl up,” or put more traps on a line, based on how far out they’re fishing. The same would be used to determine how many weak points integrated into a line are needed. Weak points are used so the rope breaks at a strength equivalent to 1,700 pounds, the strength at which a right whale can break free of entanglement.

Maine-specific gear marking is also part of the draft plan, as is 100 percent harvester reporting. Both would help determine whether right whales found dead from entanglements died in Maine waters. Harvester reporting, a rule already passed by the Atlantic States Marine Fishery Council, will provide data on the number of vertical lines in the water, as many lobstermen buy 800 tags each year but fish fewer traps, because of the difficulty in increasing the number of tags after using fewer the previous year.

“It’s all about lines and tags,” Keliher said. “If tags are issued, but not used, it still counts to the feds.”

The measures drafted by Keliher and the DMR would result in a 25 percent reduction in endlines, Keliher said, noting, “The zones still must play an integral part here. There likely won’t be a one-size-fits-all [plan].”

From this point, Keliher said, the draft must be finalized, then be submitted for federal approval, and go to rule making around January 1, 2020, with another comment period. The DMR will also ask for flexibility in its own, concurrent rulemaking to potentially make changes, for zone-specific or safety reasons. “We think we have the basis of a strong plan,” he said.

While a few lobstermen in attendance indicated they could work within the proposed plan and questioned the details and mechanics, others continued to express frustration that Maine lobstermen were carrying the burden of reducing right whale entanglement risks when they were not the cause.

“We’re guilty [to NOAA] until proven innocent,” said Julie Eaton, chairman of the Legislative Committee for the Maine Lobstering Union, and a Stonington lobsterman. “Let’s clear this and move on. [But] where do we say ‘enough’?”

For Stonington lobsterman Richard Larrabee, however, a trap reduction, part of NOAA’s proposal but sidelined by the DMR’s plan, still loomed. “With less endlines, there’s less area we can cover. Is the next conversation going to be trap reduction? Because it seems that’s where everything is headed.”

But Keliher was straightforward on the need for compliance, now: “This is the backdrop of the conversations we’re having with NOAA—the threat of what may happen in court.”

Recent lawsuits brought by environmental groups advocating for right whale protection, federally mandated under the Endangered Species Act and Marine Mammal Protection Act, have been decided in their favor, with fishing areas being closed to lobstermen.

“These are federal laws,” Keliher said. And while he highlighted recent efforts by Maine’s Congressional caucus in Washington, D.C., which has been “very strong in pushing back” and in securing appropriations, he warned, “this is a one-state issue that’s hard to get traction in Congress.”

Keliher, the DMR, and lobstermen will wait to see how NOAA Fisheries reacts to the draft plan. “The feds are still looking at 60 percent risk reduction. This plan is 25 percent line reduction. While it has impact to individuals, partly offshore, it’s something we hope we can make work.” 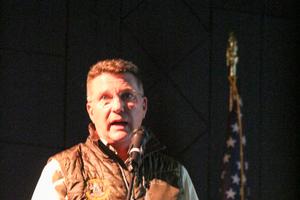 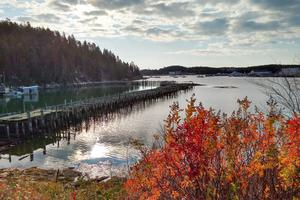 A view of Greenhead Lobster’s lobster pound just before the causeway to Moose Island. Lobstermen and industry stakeholders heard details of a plan to reduce whale entranglement risks November 4 at The Grand in Ellsworth.