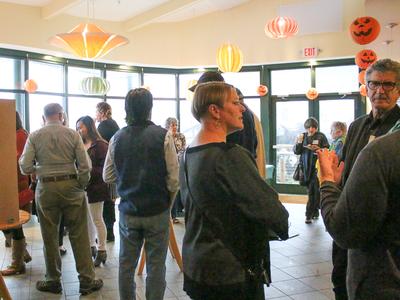 The history and culture of the Blue Hill Peninsula were highlighted during a tourism symposium at the Stonington Opera House on October 31. Pictured, attendees mingle in the Opera House lobby.

From elected state officials to business owners and tourism experts from Downeast Acadia, the Stonington Opera House was alive with celebration of the area’s tourism successes and conversations about improvements in the future during the fifth annual tourism symposium on October 31.

This year’s symposium centered not only around data and numbers of people and money coming into the area but also on the history, arts and culture of the Blue Hill Peninsula.

Per Janson, Executive Director of Opera House Arts, detailed the history of the Opera House, and the events and programs that have been hosted over the decades, from plays and dance recitals to films and basketball games during the early years.

“One thing I have really observed during my short time here is that this is a real sense of community,” said Janson. “We have collaborated with organizations and groups around the area, and I think that’s what makes this area so special, and why so many of you made the drive down here today.”

Bert Yankielun from Island Heritage Trust detailed work he has done and continues to do, electronically mapping historical sites to discover centuries-old artifacts and locations not included on more recent maps of Deer Isle and Stonington.

“It is technical but fascinating, and shows what makes this island so intriguing, and why people should come here,” he said.

Paul Anderson, Executive Director of Maine Center for Coastal Fisheries, discussed visitors to the Discovery Wharf in downtown Stonington that he said brought in “thousands” of people during the 2019 summer season. Anderson also talked about the fisheries business in the area, and how it relates to tourism in that millions of people flock to the coast of Maine for lobsters, clams, scallops and other fish harvested from Maine waters.

“Seafood has been an important part of the economy here since the 1960s,” said Anderson. “The value has grown over time, with lobster making up 74 percent of the $600 million in last year’s total seafood. We all know about some of the issues surrounding the fisheries industry, from ecosystem changes to things like entanglement and bait shortages.”

Anderson noted that people in the industry are busy looking for ways to continue the booming fisheries in Maine, as tourism is highly dependent on that.

“The bottom line is, seafood just tastes better when you’re sitting by the water,” he said.

Sedgwick pianist and composer Paul Sullivan detailed the rich music culture of the Blue Hill Peninsula, and played songs he wrote about the various seasons of Maine, before keynote speaker and Maine Poet Laureate Stu Kestenbaum took the podium.

“I came to this area as a tourist in college, with hair that could touch the ceiling, an aluminum framed backpack and a guitar,” said Kestenbaum. “I came down to visit on Flye Point Road in Brooklin, and I just knew this place was special.”

Kestenbaum read an assortment of poems from his books, all of which highlighted people and places in the Blue Hill Peninsula and Deer Isle communities.

Broader information about the Downeast Acadia and statewide tourism industry shared throughout the symposium detailed the number of overnight visitors to Maine (37,123,978), total amount of money brought in ($9.16 billion), jobs supported (109,501), total taxes ($611 million) and direct tourism expenditures ($6.2 billion). Those 2018 numbers were all higher than the 2017 numbers on record.

After the morning symposium, an awards luncheon was hosted at Stonecutters Kitchen.