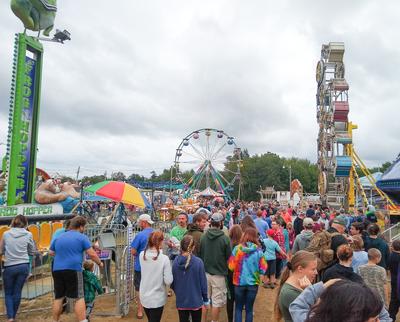 Crowds of people fill the Midway on Labor Day for fun and games at the fair.

When you see lines of cars stretching along Route 172, you know the Blue Hill Fair must be in town.

Labor Day weekend brings the five-day event to the Blue Hill Fairgrounds and from the Lime Fizz booth to the Ferris wheel, there is plenty to do.

It is easy to talk about what you see at the fair. There are vendors selling a variety of food, games and rides in the midway and animals ranging from alpacas to draft horses. But, it is what you don’t see that makes the event work.

Preparations for the fair take an entire year to come together. Acts have to be booked and contracts signed, vendors need spaces and fire and emergency personnel have to be accounted for.

Then there are the things no one can plan for, such as the weather. Ask Fair Superintendent Rob Eaton about the weather and he is quick to say he doesn’t look at the forecast during the fair. “It is the one thing I can’t control,” he said on Sunday afternoon. “We take it as it comes.”

This year, early season rains wreaked havoc on the parking areas, and just about when it had dried, two days prior to the fair, more than four inches of rain fell at once. A handful of cars got stuck in soft ground in the outer parking areas on Thursday night, leading to ever-changing parking schemes for the remaining days of the fair, said Eaton.

While rain threatened to fall throughout the day on Monday, it held off until about 6 p.m.—just as the Demolition Derby ended. The remainder of the day continued as planned, with attendees waiting for the evening laser light show.

For Eaton, having a year’s worth of work culminate into a five day schedule is a challenge, but the work is shared among a 15-member board of directors who put in countless hours before, during and after the fair, he said.

From directing parking, to ensuring no more than 800 people fill the grandstand for any one show, there is no shortage of tasks—large and small—that board members fill.

Here is a look at some of the numbers behind the scenes of the fair.

Blue Hill Fair by the numbers

Trash cans/liner changes: 250/1,250
Deputy patrols: 1-7 deputies depending on the time of day or event taking place
Employees: 80-100
Vendor spots: 65 on the “independent” midway, 40-50 on the Carnival Midway
Number of food vendors: 32 on the independent side, 20 approximately on the carnival side
Golf carts rented: 10
Walkie talkies rented: 30
Cars pulled out of the mud by a tow trucks: approximately 6
Number of paid acts/shows: 11
Max seating at the grandstand: 800
Number of animal stalls: 100 approximately
Amount of wood shaving needed for the weekend: 3 tractor trailer loads
Number of months it takes to plan the five-day event: 12
Typical electric bill for the fair week: $10-$12,000
How many days does it take to “wrap up” the fair after it ends (cleaning, paying bills, etc.): A couple of months 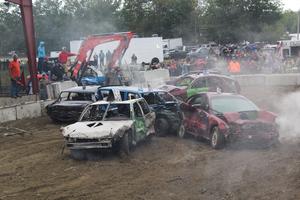 Live in front of the Grandstand, the Maine State Demolition Derby brought close to 1,000 spectators to the Monday afternoon event. 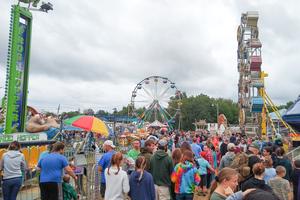 Crowds of people fill the Midway on Labor Day for fun and games at the fair. 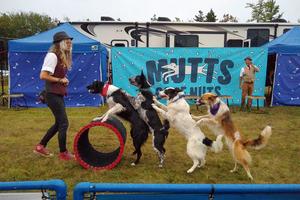 A group of rescue dogs perform a conga line in Mutts Gone Nuts comedic dog show, which was new to the Blue Hill Fair this year. 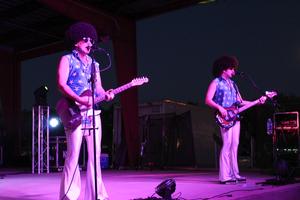 Entertaining the crowds, Motor Booty Affair took to the stage Friday night while crowds danced the night away. 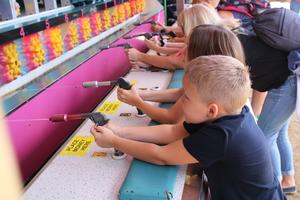 Who can shoot their water pistol with the highest accuracy? 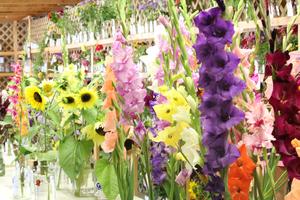 Gladiolus and sunflowers lend a big splash of color to the Flower Show. 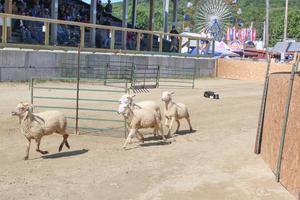 Sheepdogs tested their herding skills at the Northeast U.S. Sheepdog Trials, on the Grandstand track on Sunday, September 1. 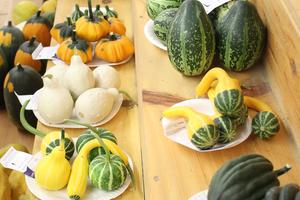 Gourds, of all sizes and colors, fill Exhibition Hall shelves. By Sunday, first- and secon-place ribbons were awarded to many. 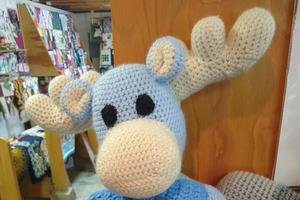 The arts and crafts show had a variety of crafts including a first-place winning crocheted moose by K. Cousins from Blue Hill.