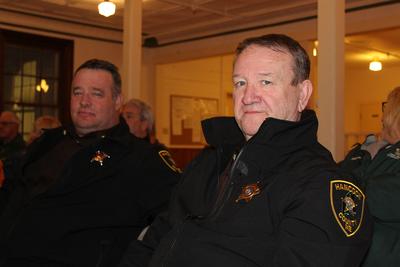 The Hancock County sheriff stopped sending deputies to patrol Stonington in mid-January when he discovered the town intended to put the $70,516 contract on a referendum ballot in March.

Selectman Travis Fifield said before Monday’s Board of Selectmen meeting he’s seen no increase in crime since the patrols stopped.

“People will say, ‘Why do we need this extra coverage’?” he said. “Then the problems restart.”

Kane said he’s been told that people are starting to tear up the town, but nothing substantial he can point to.

“I suspect you’ll see something very different when the weather breaks,” he said.

“It was the playground for people with time on their hands and money for drugs, money for tires, money for gas,” said Johnson. “There was all sorts of mayhem.”

The town pier and Hagen Dock were the epicenter of the trouble, he said.

The problem has partly to do with the timing of the town’s budget process. Though the town and the county have budget years that end on December 31, Stonington voters don’t approve the budget until sometime in March.

That means the town spends money under the assumption that the previous year’s budget is still in effect, said Town Manager Kathleen Billings in a phone interview. Then when the voters ratify a new budget, the town spends at the new budget levels, Billings said.

In the past, the town and the sheriff have relied on good faith to get through the interim period, said Kane.

“There’s never been a concern,” he said. “We’ve honored it, the town’s paid it.”

Kane said the sheriff’s office decided to end the patrols this year after the Stonington selectmen voted on January 13 to put the sheriff’s contract on the referendum ballot.

The relationship between the sheriff’s office and the Town of Stonington began to change last year, Kane said.

Then, the selectmen voted to reduce the sheriff’s patrols from three times a week to twice a week.

But Town Meeting in 2019 overruled the selectmen by a 2-to-1 vote and raised the funding to pay for thrice-weekly patrols.

Kane said the Town of Stonington has contracted with the sheriff’s office for about 30 years.

“We’ve worked hard to make Stonington a better place, and so has the town,” he said.

He said Stonington is now a tourist destination. “You’ve got it to the point where it is, with good people and good things happening, and now you’re going to take a step back.”

The sheriff’s office will still respond to complaints even if there are no patrols, according to selectmen and to Sheriff Scott Kane, both speaking at a public hearing on the ballot referendum on Thursday, January 30.

“Not having this contract doesn’t mean they won’t come when called,” Fifield said.

Sheriff Scott Kane agreed. “You just wouldn’t have that dedicated patrol where someone’s assigned within the town limits of Stonington,” he said.

The problem for Stonington, he said, is that it doesn’t get the benefit of marked police vehicles traveling through town because it’s at the end of the road.

“We don’t drive through Stonington to get anywhere, but we have to drive through Blue Hill to go to Penobscot and Sedgwick,” he said.

Pat Kane said he was about to hire a new sheriff’s deputy at the end of the year to help patrol Stonington. However, he said, he stopped the hiring process when he learned of Stonington’s plans to put the contract on the ballot. He said he couldn’t in good conscience hire the candidate knowing he might have to lay him off in March.

Donna Brewer, chairman of the Board of Selectman, dismissed that argument at Monday’s selectmen’s meeting. “He’s grasping,” she said.