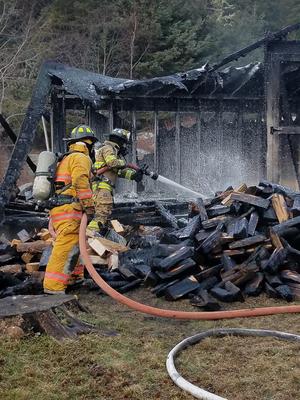 by Faith DeAmbrose and Nat Barrows

Shortly before 7 a.m. on New Year’s Day a fire broke out in a woodshed at the Indian Point Road property of Mike and Suzy Shepard that threatened their home approximately 10 feet away.

Fire Chief Ryan Hayward arrived alone on the scene first with a tanker truck, and quickly laid out hose and knocked down the fire before it could spread.

Another fireman from Stonington responded as did the Memorial Ambulance and, in about 5-15 minutes, firemen and engines from Deer Isle and Sedgwick arrived.

The heat from the fire caused damage to the home’s siding and broke a few windows, said Hayward, but had it not been for the fast response the home would likely had suffered additional damage.

“The shed was filled with wood and once the fire was knocked down, we emptied the rest of the shed to avoid any re-ignition,” said Hayward.

Suzy Shepard said the firemen used a thermal imaging camera to check the house for any possible hot spots. All the four cords of fire wood in the shed were lost, Shepard said, as the wood was either burned or covered with fire retardant foam.

“We have a wheelbarrow full of wood left,” Shepard said.

Crediting Hayward’s quick response as key to saving the house, Shepard also expressed worry about the department’s having trouble finding volunteer firefighters. Noting that it seems this is not just a local problem, Shepard said they would have probably lost the house “if Ryan had been out fishing” that morning. 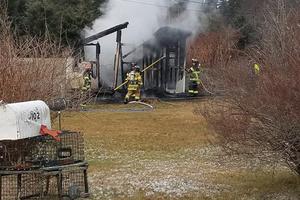 The Shepards' house suffered some external damage, but the wood shed and its contents were a total loss. 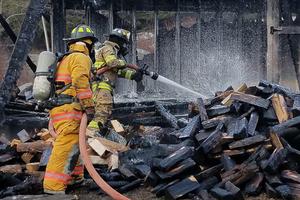