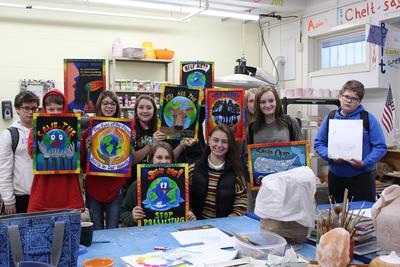 Art students at Deer Isle-Stonington High School have taken up arms against global warming, pollution and other environmentally harmful issues through their artwork.

Students in Cynthia Pease’s art classes have been working on creating pieces focused on raising awareness about the things that are harming the planet, with everything from harmful chemicals in our food to carbon monoxide exhaust floating into the air from gas- and diesel-powered vehicles.

“It’s a serious issue,” said senior Eliza Borntraeger, who is not one of the students involved in the art project but has been involved as a mentor, as her senior exhibition project is about creating a smaller carbon footprint at the school.

“Coming into my senior year I am definitely aware of global warming, and the goal is to spread that awareness,” she added. “When I graduate I’ll pass the torch, and we want to be able to feel confident that it’ll continue to be passed down even way after we’re gone.”

Junior Grace Morey, who currently holds the title of Miss Maine Teen USA 2020, said that her goal throughout the competition was raising awareness about global warming and reducing the overall carbon footprint as a society. She has also been a mentor to the students in Pease’s class as they worked on their project.

“The youth standing up is so important,” said Morey. “When enough people stand up and demand change, the higher powers have no choice but to listen.”

“This is something I’m very passionate about,” said Pease. “The work these kids are doing is so important, and they’re doing it well. We really want to create a school with a zero footprint, and awareness is the first step in doing that.”

The work has also brought out a passion in the students. Hannah Legere created a piece that was inspired by the decline of safe drinking water, and how the issue can only be solved by working together.

“I saw a picture of the Earth with water dripping from it, and that inspired my piece,” she said. “We have the fate of the world in our own hands, and we can’t change something as important as unsafe drinking water on our own. It takes all of us.”

Kianna Heanssler took a different approach, choosing to focus on the practices of large meat industries and the use of harmful chemicals on animals, which end up in the meat that people eat from those animals.

“Animal agriculture is a big thing but it isn’t one that gets a lot of attention,” she said.

The students will continue to work on the project and work toward their goal of making their peers more aware of the issues around them, said Pease.

“Everyone has heard of global warming, but some people might not know just how important it is for us to help stop it,” she said. “It’s up to us, and to this generation, to do that.”