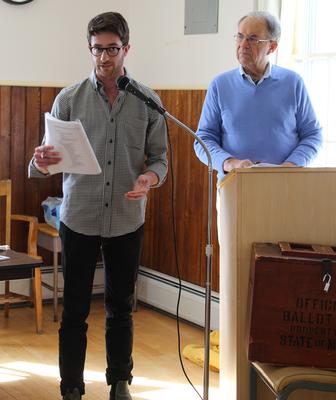 Economic Developer Henry Teverow explains some of the projects he’s working on, including affordable internet service for everyone in Stonington.

The total budget represents a 1.5 percent increase over the 2019 budget.

The scheduled election for Community School District board, between William “Bill” Shepard and Lawrence P. “Skip” Greenlaw, was called off because of a legal issue. (See related story.)

Selectman Donna Brewer said the purpose of moving the third-party requests from Town Meeting to the ballot was to encourage more people to participate.

A total of 147 people voted in the town election, 20 more than last year.

Town Meeting voters approved $75,000 to pay for upgrades to the town’s telecommunications infrastructure so every household has access to internet service fast enough to stream a Netflix movie.

“Given the situation we’re in with the pandemic, if we have to go through what we’re going through now, I think it’s crucial that everyone have internet,” she said. “It keeps us proactive, it keeps us moving ahead and it helps us retain young people.”

The project should be finished by 2021, she said.

Voters agreed to spend $30,000 on the Colwell Ramp project, including $5,000 in new money and $25,000 from surplus funds. Stonington still co-owns the property with Isle au Haut, said Billings, and Isle au Haut hasn’t paid for its share of the project. Stonington will have to take it on alone, Billings said.

“We had hopes we could do more with the property sooner,” she said. “It’s a huge asset for us.”

Selectman John Steed said the creation of a pier will add more space for parking.

Another $75,000 from surplus and $15,000 in new money will go to reserve funds for repairing damaged seawalls, for which there is no federal emergency money, according to Billings.

And $75,000 more from surplus will go into a fund to dredge the harbor. “It looks like we need to get rid of some mud,” said Selectman Evelyn Duncan.

Cynthia Bourgeault said that number seemed a little low, since Stonington’s harbor is its most valuable asset. “I would encourage you to think generously about what’s needed,” Bourgeault said.

“It’s getting in hard shape,” she said. “You can’t have splinters, things that can catch kids with their little hoodies.”

Playground equipment is expensive, she added, and the playground funds will allow the town to buy something that’s “safer, friendlier and looks a little better.”

Voters also approved setting aside $15,000 to improve the ball field across from the playground. With $15,000 already in the account, the town now has $30,000 to start work on the project.

Julie Morringello, who helped develop plans for the ball field, said the money will pay for an initial phase of improvement including parking and landscaping.

“This sets the stage for other things that can happen,” she said. “It will take the cars off the ballfield and fix up the front edge.”