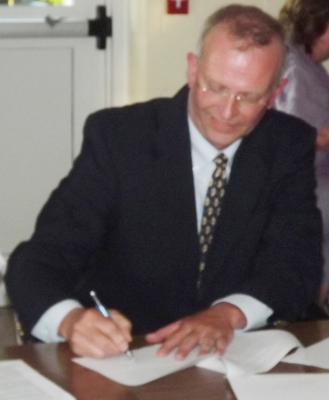 Mark Jenkins, a 25-year veteran principal and teacher, was confirmed unanimously as the new Union 76 superintendent at a Union 76 board meeting at the Deer Isle-Stonington High School on Thursday, June 21.

Jenkins will succeed Robert Webster, who has served as superintendent of the union for 19 years. Jenkins steps up August 1 at an annual salary of $98,000, plus health and other benefits.

Jenkins recently served as principal of Fort Fairfield High School for 12 years. Union 76 board chairman Skip Greenlaw said the “academic achievement of the students has improved dramatically” under Jenkins’ tenure. Greenlaw said Jenkins has a collaborative style, asking for input from faculty and bringing his own ideas to the table.

“I’m sincerely honored and humbled,” said Jenkins, addressing the dozen people gathered in the high school cafeteria. Jenkins said he is originally from Portland, and has two grown children who are now out of college. “My wife [Robin] and I are looking for new adventures,” said Jenkins.

CSD 13 board chairman Mark Cormier noted the union board had been somewhat discouraged by the small pool of applicants—only three—and had thought they would need to appoint an interim superintendent until the search could be conducted again, with more lead time. “However, I came out of the first interview feeling great,” said Cormier. “I’m really excited looking ahead.”

Greenlaw noted that three members of the Union 76 communities traveled to Fort Fairfield to interview members of Jenkins’ faculty and his superintendent, reporting that Jenkins was considered an “extremely competent educational leader.”

Greenlaw thanked the school committee for its hard work in finding and hiring Jenkins, and CSD board member Stephen York thanked the community members and staff involved in the superintendent search process.

Brooklin school board chairman Mike Sealander thanked Greenlaw for his leadership on the union board.