Two articles that generated the most comment involved law enforcement and an appropriation for the Shellfish Committee.

To open business, Skip Greenlaw was elected moderator. The results of the morning’s votes were announced: Selectmen Evelyn Duncan and Chris Betts were reelected, although Betts, a write-in, defeated Robert Ray by only seven votes.

Deer Isle and Stonington voters elected Virginia Olsen and Stephen York to the CSD board. Also elected in Stonington were Ronald Eaton, Stephen York and Frederick Whitford to the Stonington Sanitary District.

The selectmen’s recommendation of $67,500 law enforcement passed, but not before discussion. The money covers a deputy for three days, chosen at random by the sheriff, but always including one weekend night.

Marsden Brewer said, “It’s every Monday night they’re down here. It’s almost a duplication of service. We already get state police and the sheriff. They all work together to cover stuff. If you call, they’re down here pretty fast.”

Michael Dougherty, who owns Isalos Gallery on Main Street, said, “That wasn’t the case before we began paying them.”

Ian Walker said that it is possible to check if the deputies come at random, as they are supposed to, by checking their reports. Billings-Pezaris said that she had the paperwork, which has been published in the newspaper, but that it doesn’t always happen.

Robert Ray asked if Stonington is the only town that contracts for extra coverage and Billings-Pezaris said, “No. Castine, Brooklin and Tremont, and there are two or three others.”

Boyce’s Motel owner Barrett Gray said, “As a business owner, it makes a huge difference having police down here. A couple of weeks ago I noticed some small increases of vandalism. So yes, we definitely do need it in the winter.” The article passed as written.

The recommendation from the selectmen for the shellfish committee was $5,000. Leading up to town meeting, a petition had been circulated by the clam committee asking each town to give the committee $10,000.

At the meeting Ray spoke in support of the conservation work done by the clam diggers, pointing out that the clam diggers contribute to the local economy, and the work is open to anyone who wants to get a permit and do it. He said some communities restrict permits, but that on the Island permits are available to any resident. He explained that without the money the committee would be unable to pay the shellfish warden, and without the warden “we would have no clam committee…no ordinance.”

Selectmen Evelyn Duncan and Donna Brewer spoke in favor of increasing the amount. Brewer said, “Our landings are the highest in the state because our clam committee does a really good job with conservation and reseeding, and they have a really good warden. It’s a worthwhile amount of money to put into it. It’s a lot of jobs and it’s money that stays here.”

Duncan said “I agree. I’m not sure $10,000 from each town is enough. We should expect to see more warrant articles [for more money] in the future if we want to support this industry.”

George Powell moved that the amount be increased from $5,000 to $10,000 and the article passed unanimously. Ray thanked the voters.

Article 52, which requested $9,520 for the town parks, prompted Siri Beckman to ask where the town parks are. They are the miniature village and Stinson Park, which includes the benches and the stonecutter statue. Most of the money, Town Manager Kathleen Billings-Pezaris explained, goes to mowing, emptying the trash cans and taking care of the bathrooms.

Resident maggie davis said there aren’t enough trash cans, and suggested that if anyone could think of creative ways to get more trash cans at no expense to the town they could call her at home.

When Article 69, “To see what sum of money the Town will vote to raise and appropriate for the Island Community Center” came to the floor, Selectman Chris Betts suggested raising the amount from $10,500 to $13,000 to cover the cost of a range hood in the kitchen, required by fire regulations. The article passed at $13,000.

Two ordinances—one governing cell phone towers and the other windmills—passed. Both ordinances detail the permitting process.

The wind turbine ordinance covers setbacks from abutting properties, provisions for noise and a bond in case the windmill is discontinued, so the town isn’t responsible for taking it down. The ordinance requires a permit whether it’s on public or private land.

Unusual among town meetings, the proceedings were projected on the wall behind the selectmen as the meeting progressed, including what everyone said. Billings-Pezaris said a lot of attendees appreciate being able to see what everyone is saying, even if they can’t hear what is being said. The technology that makes this possible is a combination of audio, Skype, and Streamtex. It all goes to The Maine Captioning Service which is provided with a copy of the warrant. The cost for the service is between $300 and $400.

At a selectmen’s meeting which followed the town meeting, George Stevens was elected chairman and Donna Brewer, vice-chairman.

Billings-Pezaris announced that Ryan Kunkel had been hired as Animal Control Officer for a six-month probationary term at $13.50 an hour. She said that the previous ACO had worked about 11 or 12 hours a week. 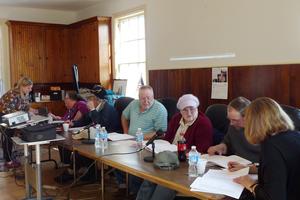 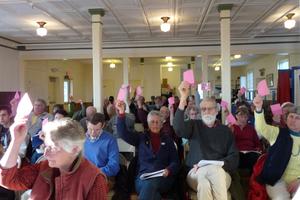