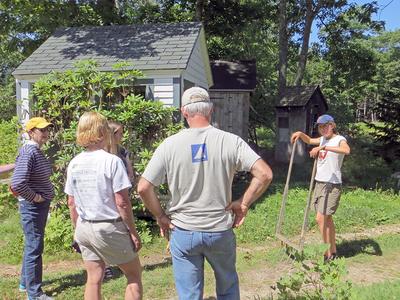 Anneli Carter-Sundqvist (far right) demonstrates the use of a broadfork to a group of visitors to the Deer Isle, Maine hostel in July 2014.

When you first meet Anneli Carter-Sundqvist, a tiny powerhouse of a woman nearly always on the move, you might easily believe that homesteading as well as running a hostel represent a way of living she learned from childhood onward, so accomplished are her skills, so expansive is her knowledge and so boundless her enthusiasm for her chosen way of life. In A Homesteader’s Year on Deer Isle, her recently published first book, however, Carter-Sundqvist dispels that notion by clearly declaring, “I haven’t always been a homesteader on Deer Isle. Once I was a traveler….”

Her story, in fact, begins in another country, on another continent altogether. One of four children and born in Sweden, to social worker parents, she grew up in a city—not on a farm—whose population totaled over 100,000. As a young adult, she moved to an even larger city, studied creative writing, and caught the travel bug, which led her to follow an irresistible urge to see the world. Her travels ultimately took her across the globe to such far-flung countries as Libya, Cambodia, Guatemala, Vietnam, Romania, and a host of others, many of them devastated by war and often lacking essential resources. She “felt called,” she said of that time, to work in conflict resolution as she observed the overwhelming costs of war to both land and people.

To afford her travels, she said she waited tables or took other part-time jobs, raising just enough money to fund her next journey, noting that she always “traveled solo.” During her frugal, nomadic life, she sought out “cheap transport, inexpensive food and more than anything, budget accommodations.” It was hostels, she writes, that “made it possible for me to see the world.” In 2005, one of her journeys took her across the U.S., and she ended up in a hostel near Savannah, Ga., where she met native Mainer Dennis Carter, who just happened to be starting a hostel along the Maine coast, on Deer Isle. When he invited her to come north to help him, she said in a recent interview, she “didn’t have to think twice” before accepting. An intervening year of more world travel occurred before she returned to the U.S. In 2009, the pair officially opened the hostel and Carter-Sundqvist’s life in homesteading and running the hostel alongside Carter began in earnest, a marked contrast to her former intrepid life of travel.

The time had seemed right, though, for settling down, she said. By then she had grown weary of traveling and longed “to make lasting relationships,” something her nomadic life hadn’t allowed for. Now, some five years since they first opened the Deer Isle Hostel’s doors to guests, Carter-Sundqvist has indeed settled down. She and Dennis have married and expanded the hostel and their homesteading projects significantly. They have enlarged their gardens; built several new outbuildings; begun raising pigs and running a sawmill; and continue to host an ever increasing number of summer guests. Their tireless efforts in homesteading were rewarded in 2013, when Mother Earth News named them the magazine’s Homesteaders of the Year. Seeing her bountiful gardens now, or seeing her confidently wielding a broadfork, it’s nearly impossible to believe Carter-Sundqvist was in her twenties before she saw her first bean plant!

Never one to sit leisurely for long, Carter-Sundqvist added another dimension to her already busy life by venturing into the blogosphere, writing a regular blog for Mother Earth News, as a way to chronicle her homesteading experience throughout the calendar year. Begun in January 2013, her blog offers descriptions of many of the activities and projects she and Dennis have undertaken, as well as her ideas and philosophy regarding homesteading and sustainable living. Even when she first began, she said, she thought she would one day turn her blogs into a book.

In January of this year she set out, with typical determination and confidence, to do precisely that, having “a clear vision” of its appearance already in mind. A long winter with “the power out” became the impetus for her sustained writing. “All I could do was write,” she laughed, noting that she would move to Nervous Nellie’s kitchen to do her writing—to where she still retreats—glad for the excuse to be “out of the house.” She kept at it daily, editing what she’d already written, writing new blogs, giving the book its order and shape, while simultaneously researching online printing options, intent on making her book affordable. She credited George Eaton for the graphics and layout. By mid-March, she said, the book was ready for the printer.

Arranged according to the seasons and beginning and ending with winter, A Homesteader’s Year on Deer Isle features numerous photographs and is divided into 30 sections, each addressing an aspect of the homesteading life Carter-Sundqvist shares with her husband. The former blogs chronicle everything from butchering pigs to Carter-Sundqvist’s self-proclaimed “gardener’s weak nerves”; from preserving the garden’s summer bounty through fermentation and cool storage, to what the pigs are fed; and from felling trees for building, to planting an orchard, as one season flows into another.

Not only does she describe the “what” and “how” of homesteading, Carter-Sundqvist also offers the reader the “why” of their chosen way of life. Her philosophy of “living in simplicity” and in harmony with her environment becomes the common thread—the “why”—that weaves various descriptive sections together. A sensitive regard for the impact on their environment that attends every choice she and Dennis make is the constant that guides her life. She writes unequivocally, “We live a life we believe in.” In one example after another she offers proof. Take the entry entitled Homesteading Economics 102, in which she forthrightly declares, “For years we’ve lived below the Federal poverty line, and happily so.” She continues by explaining her love of and desire for independence from “the mainstream economy,” which she feels is not possible to achieve by working at a conventional 9 to 5 job. Instead, she declares, “I want to spend the majority of my waking time in connection to the land I reside on and with the person I love.”

Yet, she is also acutely aware of the challenges her chosen way of life poses. The vagaries of weather that can significantly affect the garden that produces so much of their food, the temptation to take on more than can be realistically accomplished, or finding the balance between private and public time during their particularly hectic summer lives, when the demands of hosting hostel guests can become overwhelming, are all challenges that arise and must be dealt with. Yet Carter-Sundqvist indicates they take the setbacks, the challenges, in stride. If the cucumbers are savaged by beetles one summer, she looks hopefully to the next summer, when she will try again. If her learning curve in how to use every scrap from their butchered pigs is steep, she recognizes that each year’s experience will enlarge her knowledge.

She is also pragmatic enough to recognize that her “chosen path” may have to be modified. Gladly using an outdoor shower in good weather or heating water on a woodstove for a weekly bath in winter; living year-round without refrigeration for food storage; using a composting outhouse; and pedaling a bike more frequently than driving a car, all represent choices the couple has purposefully made, and about which their hostel guests frequently marvel and inquire, wondering if Carter-Sundqvist sees herself and Dennis living this life into old age. Even though she hopes that their good health “will remain intact,” that the land will “remain unthreatened,” she admits that it “might not be possible” as she and Dennis age or “circumstances change.”

For now, though, the land and the richly rewarding life it offers them through their hard work, creative ideas and diligence, is more than enough. In her book, Carter-Sundqvist affirms her choice to live the homesteading life, putting down her own roots just as surely as the seedlings she nestles in the soil every spring extend theirs, and declares that “this is my home, and here’s where I should be.”