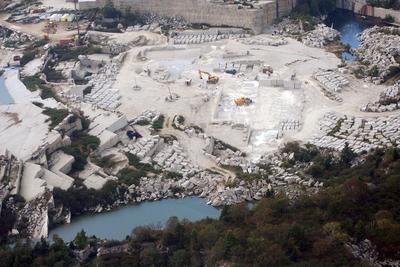 Crotch Island, off Stonington, was the site of quarry mining in the 1800s. Active mining continued into the 1960s, then declined for a brief period but is actively quarried today. This aerial view was taken in 2012.

The many rooms, walls and arches of Fort Knox, in Bucksport, were constructed of Maine granite in 1832. Why? Not just because the site was close to coastal quarries; Maine granite was known across the U.S. and Europe for its strength, size and beauty, said Steve Haynes, Director of the Maine Granite Industry Historical Society on Mount Desert Island.

“It was a very important industry here because of the large granite plutons,” Haynes said.

Plutonic granite comes from crystallized magma cooled slowly deep below the earth surface. The further down from the earth’s crust and the slower it is cooled, the stronger the granite.

In the quarries developed along the coast of Maine, granite was found up to five miles deep. In Sullivan, the granite plutons are more than 420 million years old, Haynes said.

He explained the scope of Maine’s granite industry in a detailed talk at the Wilson Museum on July 16, describing each quarry founded on the Maine coastline: the kind and quantities of equipment used for mining, splitting and transporting the granite; the varieties of granite found; and the many buildings the granite was used to construct.

Granite was cut from below the earth’s crust in large sheets by quarrymen who came to Maine to share their expertise.

“Men from Scotland, Finland, Sweden…all came to America to perform the cutting of the sheet,” Haynes said. “These men believe they were building the pyramids of America.” Post offices, court houses, state houses and cathedrals are some of the buildings that were constructed from Maine granite in the 1800s.

Each quarry produced a different variety of granite, in color, grain and strength.

Granite from the North Jay, Maine, quarry was “the white granite of New England,” Haynes said, and used to build General Grant’s tomb, the Hahnemann Monument in Washington, D.C., and, closer to home, a cathedral in Lewiston.

Granite mined in Hallowell, prized for its softness that allowed easier carving, built the Gettysburg Monument.

Wharf Quarry on Vinalhaven produced a pinkish quarry in huge sheets cut for columns from 50 to 72 feet long for the Cathedral of St. John the Divine in New York City. “There’s no other quarry in the U.S. that would offer 72-foot pieces,” Haynes said. A coarse, strong granite formed from larger crystals deep in the earth and cooled slowly, “the stone cutters love this granite because it carves so nicely.”

Off Stonington, the quarry on Crotch Island produced a lavender-tinged granite that polished well. The quarry opened in 1872, with quarrymen loading the granite sheets onto the decks of schooners for transport. “These men were very brave,” jumping from rock to rock on deck, Haynes said. Crotch Island granite was used in so many buildings, “I could go on for days with the contracts out of Stonington,” Haynes said.

Granite from Somes Sound on Mount Desert Island, mined for the Standard Granite Company, was considered the “best monument granite in the U.S.,” Haynes said. The same granite rock is found in Cadillac Mountain, formed by granite pushed deep beneath the earth by volcanic force.

The Maine granite industry peaked around 1900, but in 1920, a new market opened, supplying street “pavers,” blocks of granite exported to New York, New Orleans and Philadelphia to pave their streets. Each city required a slightly different size paving stone depending on the size of their horses, mules, oxen and carts.

The quarrymen used skill and specialized tools to split the granite without shattering it, whether for a one-foot paver or a 50-foot column. In Hallowell, for example, the list of quarry equipment ranged from 18 derricks and two traveling cranes to 14 pneumatic plug drills and pneumatic hand drills.

“These men were experts,” Haynes said.

Today, the stone dust unearthed by granite quarrying in the 19th century fertilizes plant life around the quarry sites, but the buildings live on around the world.

“[They] are a tribute to Maine,” Haynes said. 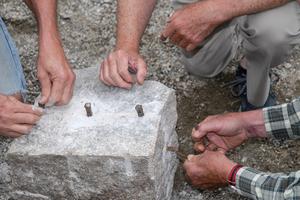 Those attending a July 16, 2014 talk at the Wilson Museum on the history of the Maine granite industry had the chance to try cutting a granite block using hand tools quarrymen used in the 1800s. The museum is located in Castine, Maine. 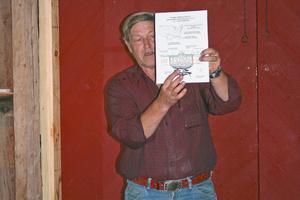 Steve Haynes, director of the Maine Granite Industry Historical Society, detailed the granite quarries that dotted the Maine coastline in the 1800s. He spoke at the Wilson Museum in Castine, Maine on July 16, 2014. 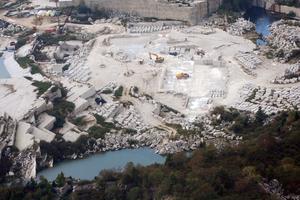 Crotch Island, off Stonington, was the site of quarry mining in the 1800s. Active mining continued into the 1960s, then declined for a brief period but is actively quarried today. This aerial view was taken in 2012.