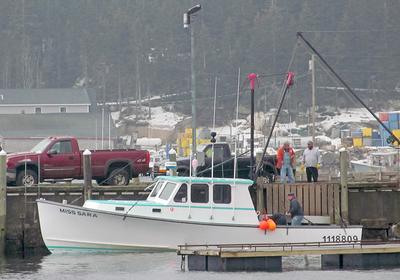 The Miss Sara docks beside the Stonington Fish Pier. All the fishing boats calling the Port of Stonington home, contributed to the more than $47 million in lobster landings to come across the port during 2013, according to preliminary figures released by the Department of Marine Resources.

Preliminary data released by the Maine Dept. of Marine Resources on March 1 show another banner year for the Port of Stonington in 2013, and an increase in the boat price for lobster was the primary driving force.

With 17,378,069 pounds of live lobster landed, the total ex-vessel value (average boat price) was recorded at $47,454,463, an increase of more than $3 million from 2012 figures. The totals could be subject to some change as the DMR finalizes its numbers.

While the total number of pounds caught decreased by roughly 232,000 from 2012 to 2013, an increase in the boat price for the crustaceans drove up the total value to exceed 2012 numbers.

In 2012, Stonington landed more than 17.6 million pounds for a total value of approximately $44.4 million.

The statewide boat price average for 2013 was $2.89 (up from $2.69 in 2012), according to a press release from the DMR. “While an increase in the price per pound is a good sign, it is still the second lowest since 1995, which underscores the importance of the efforts of the Maine Lobster Marketing Collaborative,” said DMR Commissioner Pat Keliher in a prepared statement.