The dangers to firemen on the job extend well beyond the possibilities of being severely burned, trapped by falling debris or asphyxiated.

A plethora of chemicals—especially those found in fire-retardant materials, ironically—pose serious health risks, according to Dr. Susan Shaw, director and founder of the Marine Environmental Research Institute.

Shaw gave a presentation titled “Is Firefighting Carcinogenic? Chemical Exposure and Cancer Risk Among Firefighters” at Saint Brendan the Navigator Church in Deer Isle on September 24.

The event was sponsored by the Island Heritage Trust and was attended by more than a dozen people, many of whom were shocked that such dangers could be inherent in substances designed specifically for safety.

Shaw presented findings from studies conducted by MERI and other research organizations that identified numerous cancer-causing chemical compounds in widespread use in households and tied exposure to these substances to higher incidences of cancer in firefighters versus the North American population at large.

“Fires are much more toxic today,” Shaw said, and she displayed a graph depicting total firefighter deaths annually since 1950 as well as the number of those deaths which were cancer-related.

The data showed a sharp increase in the percentage of cancer-related deaths from 1990 to 2005, and the proportion has remained high since that time. Shaw attributed this to a significant rise in the use of various synthetic materials in homes, which persists to this day.

“It is circumstantial evidence, but it’s a parallel we need to look at,” Shaw said.

Shaw quoted Alex Forrest, president of the International Association of Firefighters, as saying “Firefighters are present-day chimney sweeps covered in carcinogens. We are going to see more cancers among firefighters before this gets better.”

Shaw shared graphs depicting cancer as the leading cause of line-of-duty death, and she described cancer as being epidemic in the fire service today. According to the statistics presented, 56 percent of firefighter deaths are caused by cancer, followed by 22 percent caused by heart disease.

Shaw said that likely every fire department has lost members from cancer, and the issue is a personal one for all firefighters.

The problem has risen to the level of a national security issue, Shaw said, because of the number of first responders who are dying.

“We’re losing our best and bravest,” she said.

Flame retardant compounds such as PBDEs (polybrominated diphenyl ethers) are found in many household items such as sofas, computers, TVs, mattresses, carpeting and building insulation, Shaw said. These chemicals have been linked to various types of cancer and also are known endocrine disruptors and developmental neurotoxins. When flame-retardant furniture burns, cancer-causing byproducts such as dioxins and furans are released in the smoke and dust that firefighters inhale, ingest, and absorb through their skin.

Perfluorinated chemicals, used for stain resistance and non-stick applications, also have toxic and cancer-causing properties and are ubiquitous in households, Shaw said.

The sheer number of carcinogens was overwhelming, as one person in the audience observed, and Shaw apologized for what she called a “chemical alphabet soup” of the various dangerous substances listed.

She explained that flame retardants are not effective in reality, because they are not stopping ignition of a fire. Yet these dangerous compounds can make up to 5 percent of a given object’s volume by weight, on average, she said.

Firefighters are especially at risk due to a number of factors. There are what Shaw referred to as “multiple routes of exposure” to carcinogens during firefighting, which include skin absorption in addition to inhalation and ingestion.

As firefighters attempt to suppress the fire, they are in a high-heat environment. Shaw explained that the skin’s pores expand in response to heat and to release sweat from glands. This natural reaction causes the absorption of chemicals to increase dramatically.

During overhaul, or the period after the fire has been suppressed, firefighters often remove their respirators. This is especially dangerous because many toxins are still present in high concentrations in the air, Shaw said.

And exposure is potentially ongoing, Shaw said, because a fireman’s gear will be covered with particulate toxins and can go unwashed for months. In the past, firefighters often cleaned their gear at home, putting their families at risk of contamination.

He explained the time commitments of firefighting as well as the costs for training and equipment.

The town reimburses the department for fire truck expenses, Foley said, but firefighters must do their own fundraising for gear and other equipment.

It costs around $5,000 to outfit a fireman with a single set of gear, he said.

Training required is extensive, and “takes a tremendous amount of time,” Foley said.

“We’re doing it because we’re there to help serve the community,” he said. “It’s a calling.”

He expressed his concerns about the chemical hazards of fighting household fires, which cause “you [to] cough and choke immediately,” he said—versus forest fires, which don’t involve such an intense level of toxicity.

“Everything [in a home] is a petrochemical… the bad stuff that kills firefighters and kills people.”

“It keeps young guys from getting involved,” he said, adding that prospective firefighters are often put off by the threat of noxious chemicals released in burning homes.

And numbers are down. A volunteer department is allowed 35 active firefighters, Foley said, but his department on Deer Isle is down to just 20.

“Exposure reduction is sweeping the nation as a topic [of discussion]” among fire departments, Shaw said.

More fire departments are acknowledging that equipment must be cleaned, Shaw said. They realize it cannot go home with firefighters because it presents a real hazard to their families.

Extractor units—or large washers—are in use in some departments. These wash the equipment and air-dry it without using heat. But extractors are expensive and can cost departments upwards of $10,000 per unit, Shaw said.

Foley’s department and most others still clean their gear the old-fashioned way: it is typically hosed down and spread out on a fire truck to dry, he said.

Another critical issue deals with making backup equipment and gear available to firefighters. This is common practice in some places, Shaw said, but not in Maine.

“People need to understand what is happening to firefighters,” she said.

And still more challenges exist. When asked about firefighting gear, Shaw revealed that the protective equipment is made from some of the same flame retardant materials that are problematic when exposed to high levels of heat during firefighting, so the very gear used to shield firefighters is also a danger.

She added that her institute is working with gear producers to improve the composition of the materials used.

To date, government and laws are weak at protecting firefighters—as well as citizens in general—from toxic exposure, Shaw said.

Presumptive cancer legislation exists in 33 states to offer firefighters compensation for health treatment related to cancers caused in the line of duty, but even in these states firefighter cases are often denied—including Maine, Shaw said.

“Municipalities are fighting this tooth and nail” for political and economic reasons, Shaw said, adding that some of the firefighters who have sought compensation have died before their cases have been brought to court.

Children have four to five times higher levels of carcinogenic flame retardants in their bodies compared with adults, Shaw said.

Shaw hopes that the study will illuminate the relationship between chemical exposure during firefighting and cancer risk.

“The National study will address research gaps and will be a model for future studies,” she said. 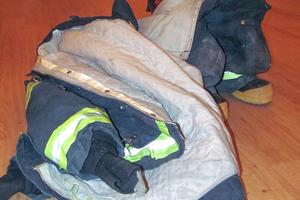 Fireman’s gear can become covered in carcinogens and other toxins. 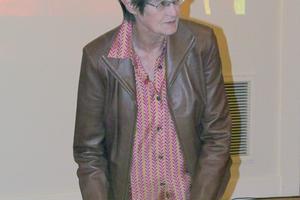 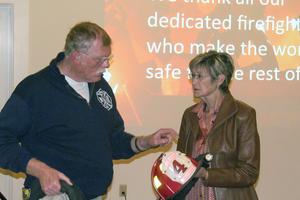