The engine module of the Ursa 1.0 rocket was tested prior to the rocket’s launch in 2013.

An island native has been busy working to make space research more accessible to schools.

Luke Saindon, 2008 graduate of Deer Isle-Stonington High School, is a founding member of Team Ursa, an all-volunteer organization dedicated to designing rocket components that schools and other institutions can use to conduct scientific experiments in sub-orbital space.

Team Ursa is currently raising money to flight test two new technologies, payload packaging units (PPUs) and separation rings, which are vital components of their program. The research and development group has already received promises of grants, but that money is contingent upon them raising matching funds.

The official launch of the fundraising effort was Thursday, September 18, Saindon said, and the team is using a crowd sourcing fundraising model—one that allows people to donate whatever amounts they wish by visiting a website.

Saindon said his personal hope for the project is that the designs will eventually be in use in Maine schools. He and his cohorts are supporters of science education, and want to encourage students to pursue STEM careers, or ones in science, technology, engineering and mathematics.

Team Ursa members aim to further the cause by “making space a more accessible laboratory to students,” according to their website.

When asked about the level of interest, Saindon stated that when Team Ursa members gave presentations to schools following the first launch project—dubbed Ursa 1.0—the high school students went “off the wall” with enthusiasm. Middle schoolers were also excited, and most kids “like the idea of space exploration,” Saindon said.

Team Ursa is developing reference designs for PPUs, which are essentially modular containers that can hold scientific instruments for research experiments.

Saindon said multiple PPU sections can be “stacked together like LEGOs” on the same rocket, so different schools can have their equipment carried to space in a single rocket launch, making the process more cost-effective for all participants.

When the rocket reaches its highest point of altitude, the modules will separate (by the separation rings releasing) and parachute back to the earth’s surface.

The PPUs will be made to standardized specifications that will work with other systems commonly in use, Saindon said, like CubeSats, for example, which are miniature satellites often used for scientific research.

Another plus is that schools only need to be concerned with building their own experiments to fit the PPUs and don’t have to worry about building propulsion systems.

In this way, Saindon explained, businesses or schools can test equipment or do research on a smaller scale versus using a full-sized NASA-deployed satellite, which is cost-prohibitive for most institutions.

As Saindon recounted, Team Ursa began in the spring of 2011 with six University of Maine students who shared the goal of developing designs for low-cost payload delivery to sub-orbital space.

The group was developing Ursa 1.0 on its own at first, but the members were introduced to Mavericks Civilian Space Foundation when they needed assistance meeting FAA regulations. Mavericks mentored Team Ursa and assisted them in refining their design, which was completed and successfully test launched in the Black Rock Desert in Nevada in September 2013.

Saindon stated that the team is diverse, composed of professionals of various disciplines, including mechanical, electrical, chemical and computer engineers, drafting artists, designers, computer programmers and even social workers.

Team Ursa is working with the nonprofit Mavericks Civilian Space Foundation to make its designs accessible through open source licensing, Saindon said. He credits Mavericks with making Ursa’s first launch possible in 2013, and he wants to help spread the word about the organization, whose vision Team Ursa shares.

“Mavericks has the infrastructure and the reach” with their educational network, Saindon said, and they provide a platform for fundraising as well.

Saindon wants people to realize that space research is becoming more accessible to private citizens due to advances in technology, computer processing and manufacturing, and he said there are other groups working toward similar goals in propulsion design, which enriches the potential for success and growth of the industry as a whole.

Team Ursa and Mavericks place great importance on making the PPU designs available as open source, or completely public. Team Ursa states on its website: “In a time where space exploration is becoming commercialized, these reference designs will be key to ensuring space technology continues to develop in an arena accessible to educators and small-scale researchers.”

The first goal of fundraising is $5,000, which will be used to build the first PPU prototype with functional separation rings, Saindon said. Additional fundraising efforts will follow as Team Ursa reaches its development milestones.

Ultimately, the team will need to raise over $50,000 for four additional launches, but for now they are concentrating on refining their technology in smaller steps.

The Maine Space Grant Consortium has pledged support, but Team Ursa needs to raise matching funds on its own to access grant money, Saindon explained.

Saindon identified significant challenges facing the team’s progress, the first of which is coming up with consistently viable recovery systems for the modules.

Financial challenges exist, too. Saindon said that people’s interest in the program doesn’t “always translate to people donating” to the projects, and there is a common, historical association between space industry development and NASA, so people assume that space-related projects are well funded institutionally, when this is less often the case nowadays.

“In the U.S. in particular, the area is not growing,” he said, compared to other countries.

“You won’t miss the water until the well runs dry…as far as STEM-educated professionals go.”

Saindon recently moved to Boston and is currently employed by an aerospace and mechanical engineering firm in Medford, Mass., where he develops control systems and has worked on a high velocity wind tunnel among other projects. Earlier, he was a research associate with NASA for a time, and worked as an engineering tutor and research assistant at the University of Maine.

Saindon is proud of his roots in Deer Isle and said he is fortunate to have been raised on the island. He credits his parents with having imbued him with a sense of creativity and the importance of problem solving.

His father, Dennis, has been the applied engineering teacher at the high school and also had a furniture-making business during Luke’s childhood. The younger Saindon learned a lot assisting his father in his furniture shop.

Saindon enjoys creating works of kinetic sculpture. His mother, Bonnie, encouraged his artistic explorations, and he feels that the combination of artistic and engineering sensibilities is a benefit to any endeavor.

“Artists have an infectious curiosity and excitement with how they see the world,” Saindon said. “They get excited about things that engineers don’t,” and this is a strength when approaching problems in engineering, he added.

Saindon was educated at home until he attended Deer Isle-Stonington High School. He credited his physics teacher, Carlton Simmons, with piquing his interest in rocketry.

For more information on Saindon’s work with Team Ursa or to make a donation, visit teamursa.org. 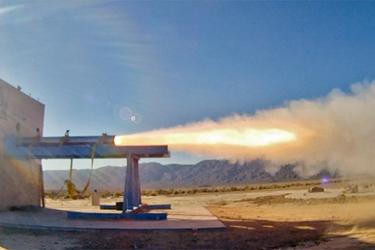 The engine module of the Ursa 1.0 rocket was tested prior to the rocket’s launch in 2013. 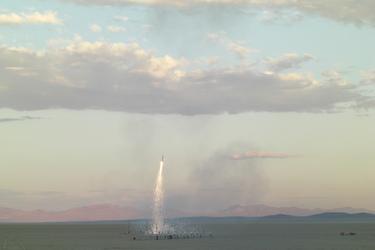 The Ursa 1.0 rocket was launched in 2013 in the Black Rock Desert in Nevada. 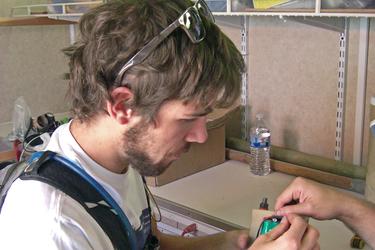 Here, Saindon installs a transmitter inside the nosecone module. 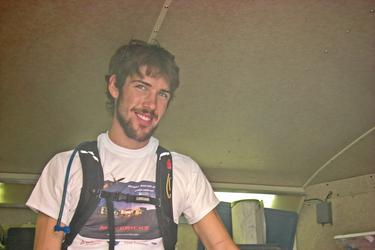