Surry
Originally published in The Weekly Packet, August 20, 2015
Surry Arts at the Barn endures as a “community resource” 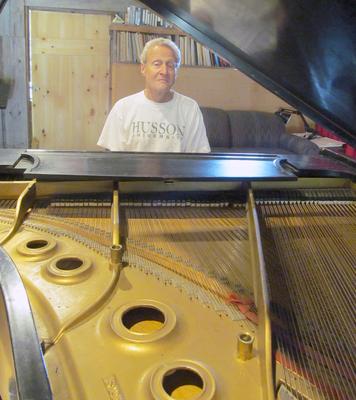 Wittenberg plays on one of the pianos in the Surry Arts venue.

Surry Arts at the Barn has been the venue for a diverse array of events during the past two seasons, including performances of classical, folk and jazz music, author presentations, a marionette theater show, a demonstration and concert by a musical instrument maker, screenings of Charlie Chaplin movies and other films, and much more. The schedule has been a busy one of late, including 13 events in August—seven of which are still to come—followed by more dates in September.

“This barn has a legacy,” Surry Arts at the Barn director Alan Wittenberg said.

The barn itself—also called the “Surry Concert Barn”—has for years been an epicenter of creativity, hosting performances by local and international musicians and artists of all calibers in addition to having been the home of the Surry Opera Company for more than 15 years. Walter Nowick, a Julliard-trained pianist, World War II veteran and Zen Buddhist teacher, bought the 100-acre farm property in the 1960s and balanced the running of a farm with teaching and organizing a program of concerts at the Barn. He founded the Surry Opera Company in 1984, and this led to collaborations with musicians from Japan, Russia and other countries. In addition to hosting international musicians at the Surry farm, Nowick took the opera company on trips abroad.

Nowick organized everything. “Walter was amazing in what he could accomplish; the man could move mountains,” former student Merle Bisberg recalled. His efforts were featured in national and international publications during the 1980s, Wittenberg said. When the Cold War was still very much a reality, Nowick brought people together across the divide.

Activity at the Barn fell silent for a time following Nowick’s death in 2013, but Wittenberg and Bisberg have picked up where he left off.

Nowick was a brilliant musician and a visionary, who “cross-pollinated this in the cities of the world” as well as in small towns like Surry, Wittenberg said.

Nowick believed “music was the international language,” and he was an inspirational figure with the remarkable ability to teach music to both non-musicians and musicians alike, Bisberg recalled.

Wittenberg, a musician and music therapist, resides on the Surry farm. With views of Schoodic and Cadillac mountains, the farm’s seven-building campus “is a great place with a wonderful history,” he said.

As Surry Arts at the Barn approaches its 50th year next year, Wittenberg and Bisberg hope to share their vision and expand the Barn’s offerings still further, to include the visual arts, spoken word and poetry, theater and independent film. Wittenberg wants to encourage artists, poets and more musicians to get in touch with him.

“We’re working hard to offer a range of cultural programs, and we welcome people to share [them], both as artists and audience members,” he said.

Wittenberg and Bisberg are also looking for younger talent to help them develop programs at the Barn, such as a kids’ program that will augment children’s creative education outside of school.

“We welcome people with creative ideas, spirit and talent to be a part of the revitalization of this space. This place is a community resource for arts, culture and more,” Wittenberg said.

All performances are cost-free, with a suggested donation, but Wittenberg is planning a fundraising event soon.

There is much to do. Wittenberg hopes to add windows to the rear of the Barn above the audience seating to allow more light to enter, and the addition of an office space on the premises would be nice, too, he said. A smaller structure on the grounds—formerly the calf barn—has been renovated into fully furnished rental space. Wittenberg is considering making improvements to the former cow barn, which includes a kitchen space and sleeping loft overhead, that was often occupied by traveling musicians hosted at the farm site during the Surry Opera years, he said.

Organizationally, Wittenberg and Bisberg are also working to establish Surry Arts as a 501(c)3 nonprofit.

“We chip away. We chip away,” Bisberg mused, echoing the words of mentor Nowick.

The Barn will host jazz performers Kaveh Haghkerdar on Saturday, August 22, at 5 p.m., and Scott Cleveland and Friends on September 1 and 8, also at 5 p.m. Classical singer Suzanne Eaton and pianist Gerald Wheeler perform on August 23, at 5 p.m., and entertainment continues through September. The last performance of the season is scheduled on October 2 and features a Shakespearian wandering minstrel, Wittenberg said.

For information, call Wittenberg at 667-1308 or visit surryartsatthebarn.com.

GALLERY — Surry Arts at the Barn endures as a “community resource” 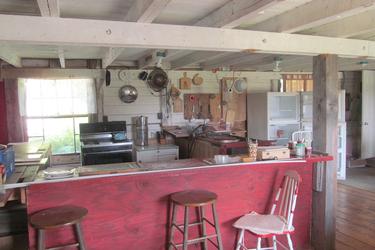 The back section of the cow barn at Surry Arts includes this kitchen space. 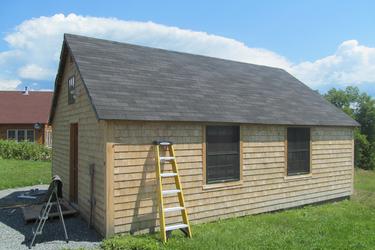 The calf barn has been transformed into a comfortable rental cottage. 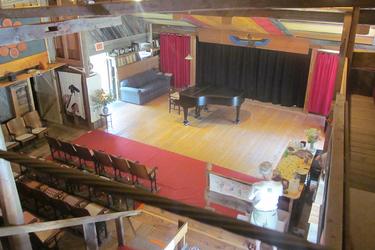 The barn at Surry Arts, originally called the Concert Barn by previous owner Walter Nowick, has theater-style seating and good sound for music and theater performances. 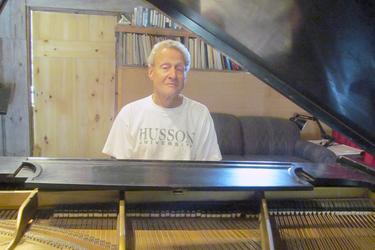 Wittenberg plays on one of the pianos in the Surry Arts venue.