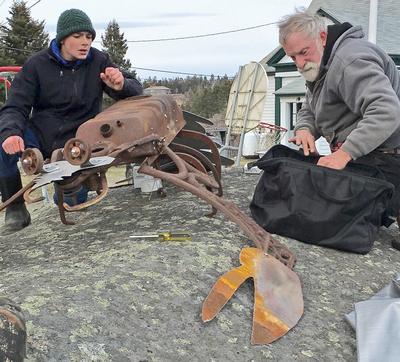 Isle au Haut eighth graders Alex Tully and Connor Maxcy recently worked with artist-in-residence Peter Beerits, of Deer Isle, to create a sculpture out of scavenged material. The lobster sculpture was bolted to a rock in front of the school, then covered for an unveiling. Above, Connor Maxcy, left, and artist Peter Beerits at work.

Creating sculptures out of scavenged objects lies at the core of Deer Isle artist Peter Beerits’ work. As an artist-in-residence, he shared his creative process with Isle au Haut eighth graders Connor Maxcy and Alex Tully, the sole students at the island rural school.

The first step for the artist and students was scouring the junk piles of friends and neighbors. The second step was deciding on their creation. The third step was to build it.

Working in secret, in the basement and behind the school, Beerits and students “hammered and pounded and cut, and ended up making this giant lobster out of old gas tanks and ice tongs and things,” teacher Paula Greatorex said.

First, they discussed what parts were needed, and then cut them out of the scrap metal they’d collected, Beerits said, talking through the sculpture as they created it.

“That’s how I make my sculptures; there are no formal plans,” he said. “You noodle how to put different things together.”

The students and Beerits—primarily Maxcy, Beerits said, because Tully’s artistic interests lay more in drawing and writing—cut and bolted the pieces together, before attaching it to a big rock in front of the school.

“To see how it was turning into this creature was interesting,” she said. “There was a point where they all wanted to give up and Peter explained to them you always hit a wall. You come to a point where you’re sure that your plan isn’t going to work. … But they got through that.”

“Then everybody walked up to the school and they unveiled it,” Greatorex said. “There were a lot of oohs and ahhs.”

The students and artist took away different feelings from the project.

“The thing I was the most impressed by was the quality of education those kids get at Isle au Haut,” said Beerits, who sat in on some classes during his four-day residency. “When I was in school, it was supposed to be one of the 10 best schools in the country. The education I had was horribly inferior to what [Connor and Alex] were getting.”

As for Connor and Alex, the sculpture is a lasting reminder of the their work. Greatorex said, “They love it. They are pretty proud.”