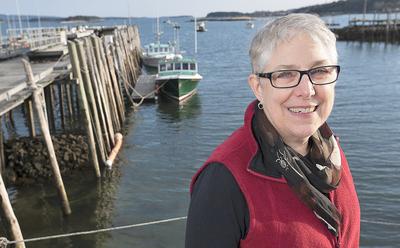 Robin Alden, executive director of Penobscot East Resource Center, will be honored as a “White House Champion of Change for Sustainable Seafood” on October 7.

There are not many people who pick up the phone and find the White House on the line. But Robin Alden, co-founder and executive director of Penobscot East Resource Center, left for Washington, D.C. on October 6 after receiving that call a little over one week ago.

Alden will be honored as a “White House Champion of Change for Sustainable Seafood” on October 7, one of 10 honorees from Hawaii to Maine.

“It’s very exciting to think that the ideas that so many of us have worked on in eastern Maine are so important for the country,” she said in an interview with Island Ad-Vantages from the Center on Hagen Dock.

She was just finishing her blog for whitehouse.gov/champions the day before her departure.

Founded in 2003 by local fisherman, Ted Ames, who is married to Alden, and Alden, PERC has sought to give a voice to fishermen in the regulatory decision-making process.

Alden was nominated by the Downeast Fisheries Partnership, a group she helped begin, but said she initially was hesitant about being singled out.

“It seemed very presumptuous,” she said. “The next thing I knew, I got a call from the White House. I’d put it out of my mind completely.”

Alden will participate in two round-table discussions and then formally tour the White House. Ames, and PERC staff member Pat Shepard will accompany her on the trip.

“For all the fishermen and people who have supported our work, to know it’s making this much of a difference on a national basis, it’s huge,” Alden said.