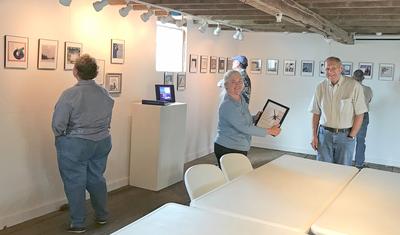 Marnie Reed-Crowell (center) in IHT’s Heritage House barn, with Rich Howe and other visitors at her exhibit of surimono.

When injury alters our abilities, indeed, our very lives, what resources can we draw on to facilitate healing, to come to terms with our changed life? For Marnie Crowell, longtime Deer Isle resident—and biologist, artist and nature writer—the path from a traumatic head injury sustained during an ice-skating accident some 15 years ago, to healing and adapting to her injuries was a challenging one. The injury caused a temporary coma from which she awoke to learn she had severed her olfactory nerve. Crowell was left with a condition known as dysosmia, similar to “phantom limb” syndrome in which sensations of a limb no longer present can still be felt. With dysosmia, the patient perceives very unpleasant odors—despite the absence of the sense of smell—that can be so severe as to significantly impact the quality of life.

Not only did she suffer a sensory loss and experience debilitating symptoms, but Crowell was profoundly affected in other ways. When she awoke from the coma, she could neither read nor write nor, in her words, “even push a pen.” For some time, she also could not “envision art,” another of her many pursuits. She recalled in a recent interview that one day, while still afflicted with dysosmia, she went outdoors and purposely called on each of her other senses to come alive, determined to focus on what she still possessed: to feel the sun touching her with its warmth; to see the beauty of the natural world around her; to hear the sound of wind and wave; to taste sweetness on her tongue. With help from her husband, she ultimately made her way back to art and to writing, but with new-found tools.

Acquiring a digital tablet, she was determined to learn new ways of creating. However, she could not find an island digital artist from whom she could learn to navigate her new device to utilize the resources it offered. She said she joined Facebook to find someone who might help her with the technology. And find someone she did: in Tasmania. Even now she refers to him affectionately as her Tasmanian tech. The tablet, she said, was an ideal tool for her limited capacity at that time. With one finger she was able to write; she could read, on the screen, one page at a time in letters she could enlarge, technological capabilities that can be enormously helpful for brain damaged patients, she noted. But she didn’t simply stop there. She pushed on to fully resume her dual interests in art and writing, albeit now with technological tools.

Art had been both passion and serious pursuit in which she majored during her undergraduate years, alongside Latin. In all the years since then she has frequently combined art with writing, integrating those two disciplines in a number of non-fiction books that focus on the natural world, beginning with her first book, Greener Pastures. Additionally, she has published numerous articles in various nationally renowned magazines such as Reader’s Digest, Down East and Audubon. With her discovery of technology’s vast capacity for creative expression, she ventured into what was for her uncharted waters to create a series of new works designed to help others find their way to well-being. The works resulting from her efforts are modeled after a Japanese art form called surimono. Translated to mean “printed things,” surimono are woodblock prints that incorporate poetry and art and were typically offered as gifts or created as commissions.

It is the gift function of the genre that appealed to Crowell in creating her own surimono. Technologically she was able to fuse her artwork with the poems she had written, thereby binding the two art forms into one integrated whole, yet giving each equal importance. She calls the result “fusion surimono.” She is now making the collected works, Songs of Seeing and Poems from a Halfway Hermit, available digitally as free PDF downloads for smartphones and tablets. She also is making them available to hospitals, hospices and other care facilities. Describing her newest creations, Crowell said she intends the works to be used by those suffering illness or injury as a path toward healing, toward joy and solace.

This isn’t the first time Crowell has borrowed from Japanese art forms to inform her work. Long an admirer of Japanese poetic forms as well as art, Crowell with co-author Ann Flewelling adapted a pilgrimage motif used by the 17th century poet Basho in chronicling his visits to sacred sites and shrines, in their book Beads and String: a Maine island pilgrimage. Following Basho’s model, the two visited all of Island Heritage Trust’s preserves over the course of a year. An exploration of the natural world as well as the stories of the people associated with each preserve, their book was created with 21st century technology in place of Basho’s ink stones and hand-made brushes.

Emphasizing that she now “pushes pixels instead of pigments,” Crowell has not fully regained her small motor skills, she said, but remains determined in her artistic pursuits. Of her intention to continue to create art she commented, “you don’t stop loving beauty and nature when you have adversity, illness, challenges.” And so she continues to write about and artistically depict the natural world that so intensely inspires her, a world in which experience is often exquisite, yet ephemeral. One such experience is expressed in a poem/illustration about a bobolink. She depicts in image and word the jewel-like bird’s remembered presence with “… long after he’s gone/the shimmer and pulse/imprint on the air.” Or take her poem about a dragonfly’s brief pause on her hand, which suggests the inexplicable communication we sometimes feel with wild creatures. She writes: “I cannot hold you/only the back of my hand/remembers what we might/have been trying to say.”

Apart from inspiration and artistic passion, all creative arts also require discipline, routines, hard work. Crowell acknowledges the necessity of discipline and emphasizes her determination to “do something every day. I show up.” In quoting Tchaikovsky—“I have an appointment with the muse and the muse is never late”—she confirms that sustained and diligent efforts are required in undertaking the work she loves.

Musing on what gives her pleasure, she says the effect of poetry on her is akin to being on a walk as when “a deer suddenly steps out … then I can feel the corners of my mouth go up.” And when she reads written passages of poems or prose that stir her, she said, “I can feel a warm glow, a physical change in my body chemistry.” Such is the evocative power of both the natural world and of language. It is that effect she hopes to convey through her surimono, all of which reflect the environment she loves and within which she has found healing and reason for joy that she hopes to pass on to others.

To view Crowell’s free digital surimono, contact her at marniecrowell@gmail.com. Crowell’s printed and framed surimono collection will be on view at IHT’s Heritage House barn on Sunset Road, through September.