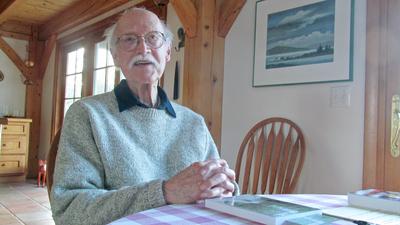 With a view of Eggemoggin Reach stretching out to the horizon and winter chickadees flitting to and from a bird feeder, 87-year-old author Paul Newlin traces the cover of his latest book, The Adventures of Jack Armstron: The Not-Quite All-American Boy, with one finger.

He describes himself as a writer of realism but said the “one thing I think is the hallmark of my writing is the humor in it.”

Like his 2013 short story collection, Reaching for September, Newlin published his latest novel through Maine Authors Publishing, an avenue for authors who choose to self publish.

“There’s a lot of interesting stuff about being old and publishing a novel,” said Newlin. One thing, he found out, is that most commercial publishing companies aren’t interested in signing older, first-time authors because of the slimmer chances they will produce a second book. Although his first novel was issued by a commercial press over three decades ago, when he returned to his own fiction writing in his 80s, the interest wasn’t there.

“The way you get published if you’re old is through self publishing,” he said.

Self publishing has become an increasingly popular route for authors, especially as e-books. In 2014, Publishers Weekly reported 31 percent of Amazon Kindle sales came from self-published books. And Newlin felt Maine Authors Publishing went beyond the stereotypical vanity press by choosing and editing what manuscripts it publishes, and engaging in publicity and arranging readings.

Newlin’s first novel, It Had to be a Woman, was published by Stein & Day in 1979, while he was a professor of 19th century American literature and creative writing at State University of New York at Stonybrook. After, he didn’t make time for writing, he said, busy with teaching and family life.

As a creative writing teacher, “you have to make judgments about [student] writing, and that’s tricky,” he recalled. “I had one student who wrote this horrible short story. It was really bad so I didn’t even bring it up in [class] session. She was so outraged at [my written comments], she set fire to it, put the ashes in an envelope and taped it to my office door with a nasty note.”

Newlin retired and moved with his wife Sue to Deer Isle in 1994. He began writing more, including time spent with a Deer Isle writers group that he recalls fondly.

His new novel is a play on the old radio program, “Jack Armstrong, the All-American Boy.” A soap opera for kids, it starred a young hero and emphasized the American symbols of motherhood, the American flag, baseball and apple pie, Newlin recalled.

“I had this idea, at what age can you no longer be considered a boy wonder?”

The novel takes place in roughly the same time period as the radio show, 1930 to the early 1950s, and traces one boy’s travels from a small, working Ohio farm to adulthood and war-time military service.

Newlin said that while the book is not autobiographical, he knows the territory. Just as Jack Armstrong is raised on a rustic, rural farm by his grandmother—who vies with Jack for status as the main character—so did Newlin spend four years living with his parents on his own grandmother’s farm during World War II.

“A lot [of the book] is triggered by actual events or ones that might have been, which is what every novelist does,” he said. “Even though it deals with this certain part of rural Ohio, I’m really concerned about the period of time it takes place in.”