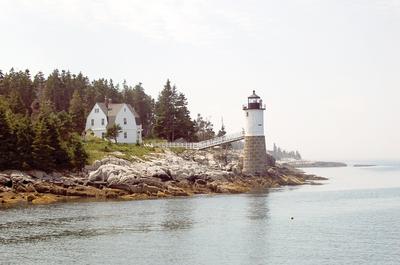 The Isle au Haut Lighthouse is best viewed from the water.

“Separated by 20 miles of deep, icy water, what could two tiny Maine islands possibly have in common? For one thing, troubled lighthouses.”

The Isle au Haut committee traveled those 20 miles to see and learn from restoration efforts at the Harbor Light. Both lighthouses are listed on the National Register of Historic Places and renovations and restorations must follow historic preservation standards.

“They must be doctored with the most advanced therapies, the most costly reconstructive skills,” Burke wrote in his comments. “The islands are far offshore. Logistics are a nightmare. And besides, a salty combo of lobstermen and history professors hardly have the experience to mount projects requiring hundreds of thousands of dollars.”

Swan’s Island Lighthouse Committee has been working on its restoration since 2005, and Burke had contacted the committee, which invited Burke and others for a visit. Sunbeam, courtesy of Maine Seacoast Mission, ferried the committee.

“Within two days after we got home, our previously disparate crew had organized itself with four new members, created a division of labor, a national fund-raising plan and a spirit to carry forward our work we never thought possible,” Burke related after the visit.

Friends of Isle au Haut Lighthouse was granted nonprofit 501(c)(3) status earlier this year, allowing tax-free donations. The Isle au Haut Lighthouse Committee, taxed with fundraising, planning and carrying out the restoration, used $11,000 in development funds from the State Historic Preservation Office to prepare a complete set of drawings, specifications, techniques and phasing to restore the lighthouse, including a working replication of the fog bell that hung over the water.

The committee is working on four separate grant applications, and hopes to begin phase one work in late 2017 or early 2018.

Burke and Swan’s Island Lighthouse Committee’s Eric Chetwynd expressed great appreciation for Maine Seacoast Mission’s assistance, and affection for the Sunbeam that carried them: “Historic preservation efforts transcend you and me…We are all in this together. The Sunbeam understands this,” Burke wrote.

Isle au Haut received ownership of the lighthouse, built in 1907, from the U.S. Government in 1998. Residents, supportive of applying for ownership, voted that no tax appropriation be requested for lighthouse expenses.

Burke, who once owned the Keeper’s House, published The Lighthouse and Me: History, Memoir, and Imagination this summer, with profits slated for the restoration effort. Visit isleauhautlighthouse.org and isleauhautmaine.us/lighthouse-committee for more information on the committee, the lighthouse, and the restoration. 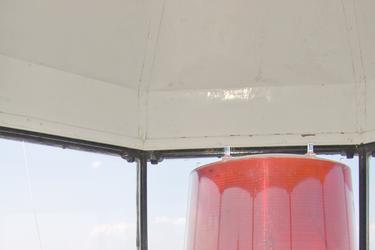 Eric Chetwynd, from Swan’s Island, and Jeff Burke, of Isle au Haut, do an on-site visit of the Isle au Haut Lighthouse.

The Isle au Haut Lighthouse is best viewed from the water.