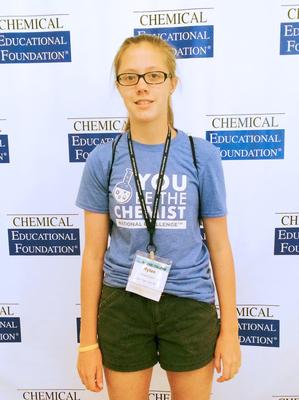 Rylee Eaton is the Maine representative at the You Be the Chemist national challenge.

Just two days after her promotion from Deer Isle-Stonington Elementary School, Rylee Eaton landed in Washington, D.C., to take part in the You Be the Chemist national challenge on June 19.

To get there, Eaton had to beat out several competitors at the state challenge, held April 8 in Deer Isle. By winning that competition, Eaton won an all-expenses-paid trip to the national championship as the representative for the state of Maine.

Eaton was one of only eight girls at the national competition, which included 42 participants from the United States and Puerto Rico.

In addition to participating in the competition, Eaton’s mother Angel said that she and her daughter toured the city and visited the Smithsonian Institution and various monuments.

This is the second year that a Deer Isle-Stonington student has represented the state at the national challenge. Last year, Ella Marshall was the state winner.

Eaton will begin her freshman year at Deer Isle-Stonington High School in the fall.