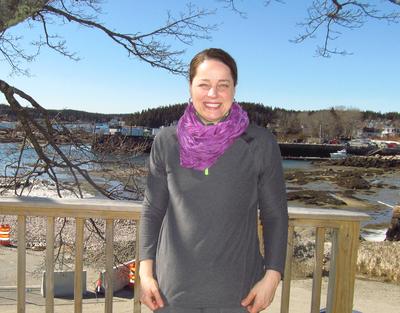 West has been involved with the foundation since 2010. The organization’s bylaws have always included an executive director, according to West, but no one was ever named to the position.

“The board was going through its bylaws, and we noticed that it listed an executive director, but since we never had one, I asked if we should just take it out,” said West.

The board decided to keep it in, which West said tipped her off of their eventual decision to name her as the executive director. West said she has worked in hospitals and in the healthcare field for most of her life. That, along with seven years of experience with the IMC, has given her an understanding of the tasks she now faces in her new position.

“The foundation basically has two arms,” said West. “One of those is that we are the landlord to the medical and dental practices [at the Island Medical Center]. There is a lot of building maintenance to oversee, contractors to talk to. Someone has to administer those things so that the practices can just do what they do [to serve the community].”

The other arm of the foundation, according to West, is that it operates as a granting foundation for healthcare projects.

“We have an endowment, so other nonprofits can approach us with ideas for health initiatives and we can grant those requests,” said West. “They report back to us so that we can see how things are running.”

The Island Medical Center celebrated its 50th anniversary last summer, at which time the foundation rolled out not only its new name but a new three-pronged fundraising campaign based on healthcare studies in the communities. That campaign raised $350,000 in just six months.

“There will come a time when the providers we have now will move on, and we will have to look at working with [Blue Hill Memorial Hospital] to find someone new,” said West. “The first prong of the fundraising was to have money available to incentivize coming here to potential providers.”

The second prong in the campaign was to raise money for recovery and education programs to combat the heroine and opioid crisis in the island communities, and the third was for the Friends in Action program, a transportation service to take people to and from medical appointments when needed.

“We amazingly raised these funds in such a short amount of time thanks to people in the community,” said West. “Some of it is pledges that will come in in the next three to five years.”

Having that money is a “double-edged sword,” said West, because she and the Board of Trustees now need to make sure it is spent in the right places.

“That amount of money sounds like a lot, but when you start to break it down you really need to spend it wisely,” she said. “It’s a whole other level of review, we need to make sure we’re spending it in the most effective way and not throw it at every opportunity that comes through.”

West said that, moving forward, it is her hope that the nonprofits in the community continue to work together to give island residents the care they need, from students in the elementary school to the elderly at the nursing home.

“I think we’ve done a really good job coming together as a community,” she said. “We just need to keep the communication open and work together.”