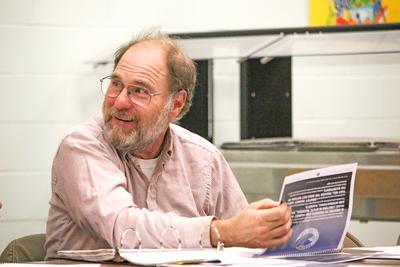 A November 16 presentation by Marianne Lacroix of the Maine Lobster Marketing Collaborative to local lobstermen had a lot of numbers but one was missing—the return on $6.25 million spent in the last four years on marketing Maine lobsters.

“How do we know we’re getting our money’s worth?” Deer Isle lobsterman Julie Eaton asked. “We’re all businessmen. When we came here today we expected some hard financial data. I’m very disappointed.”

Lobstermen pay a portion of the MLMC budget through higher license fees—to the tune of several hundred dollars more for each annual license—with dealers and processors also contributing through a base fee, processing fee and supplemental licenses. The five-year marketing venture, approved by state legislators, runs through 2018 at its peak annual budget of $2 million.

Lacroix summed up the collaborative’s efforts to market Maine lobsters, in particular new shell lobsters, to food and media influencers, namely “rock star” chefs, through sponsored Maine After Midnight events, and to consumers through media and social media content.

She said 3,000 chefs have been engaged in one-on-one conversation over the last four years, with Maine lobstermen traveling to the events to share first-hand their industry. She reported 3.2 billion media impressions with an ad value of $21 million, and 195,000 visits to the MLMC wholesale dealer database, with 36,000 visits to dealer websites.

Also, the MLMC succeeded in stopping Gulf of Maine Research Institute season predictions at the same time as the Seafood Expo North America held each March in Boston, after a 2012 prediction of a lobster glut held off buyers, costing the Maine lobster industry about $10 million dollars, Lacroix said.

But Zone C lobstermen were as concerned, if not more, with an event outside the scope of marketing, a new trade agreement between Canada and the European Union that cut tariffs by 8 percent on imports of Canadian lobsters, and will phase out European tariffs on frozen and processed Canadian lobster in the next three to five years.

“How’s that going to affect our price, within and without the markets?” Zone C Council member Ted Ames of Stonington asked.

Like losing a $20 million customer, Lacroix answered. “I think that’s one of the things already affecting the price this season.”

The collaborative has determined it can have the greatest impact on the United States market, Lacroix said, rather than focusing on Europe and China.

“Our task as a marketing collaborative is to raise and keep people aware of the product in the marketplace so they are willing to pay for it,” Gotwals said.