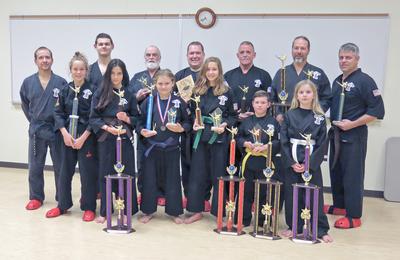 The annual “Tournament of Champions,” held by Senseis Dennis and Karen Tracy of Tracy’s Karate, brought approximately 200 competitors of all ages from Maine and Canada to the Bucksport High School Gym on October 27. According to a news release, a special feature of this tournament is team fighting, with competitors on each team drawn from different dojos. Over 20 teams competed for one Grand Champion team title, and only one grand champion winner was declared for each individual fighting category.

In the throwing event, ju-jitsu pairs competed for 1st, 2nd, and 3rd place awards. In addition, each participating dojo recognized individual students with awards for Most Dedicated, Most Improved, Best Attitude, and Student of the Year.

The Bucksport branch of Tracy’s Karate brought home numerous awards, including a sweep of first, second, and third place in the adult “under black belt” throwing division for the second tournament in a row. Five students from the Bucksport branch earned Grand Champion titles in their fighting divisions, and one student from the class was on the Grand Champion fighting team.