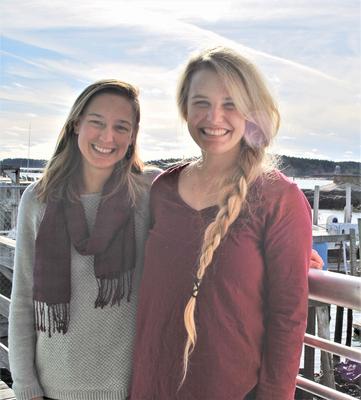 Emily Farr, in blue, and Mattie Rodrigue, in red, pictured on their last day at Maine Center for Coastal Fisheries before they started as Knauss Fellows in Washington, D.C.

Emily Farr and Mattie Rodrigue, two scientists at the Maine Center for Coastal Fisheries have been awarded Knauss Fellowships, which send professionals to Washington, D.C. to work in government or Congress for a year.

The fellowship is “one of the nation’s most prestigious marine policy fellowship programs,” and is administered by the National Sea Grant College Program, a press release said.

Both scientists were placed with the National Oceanic and Atmospheric Administration and have already started their assignments.

Farr is in NOAA’s Office of Habitat Conservation, promoting stewardship of wildlife and of commercial and recreational fisheries on the Penobscot River and nine other “Habitat Focus Areas.” These include wetlands, estuaries, rivers and coral. She also promotes stewardship of resilient coastal communities.

Rodrigue is a special assistant to Craig McLean, the Assistant Administrator for NOAA Research, which conducts and sponsors science related to oceans and coasts, climate and weather. She has a chance to learn firsthand about the complexities of running a large science organization and how research decisions are made.

Farr holds a master’s degree in environmental management from Yale. When she worked in Stonington she interviewed fishermen to chart local ecological knowledge of Maine’s fisheries. As a fellow, she will continue to advance the ecosystem-based management approaches she used during her time at the center.

Rodrigue holds a master’s degree in marine biology and marine policy from the University of Maine. In Stonington, she worked alongside local fishermen to collect data on Eastern Maine’s groundfish.