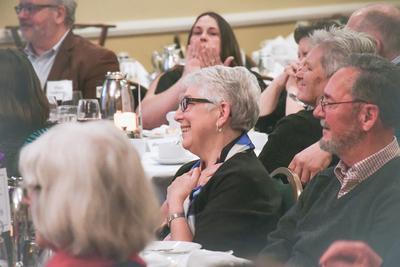 Robin Alden, her husband Ted Ames alongside, listens to a tribute at a party honoring her 45 years as a fisheries expert and her retirement from the role of executive director at Stonington’s Maine Center for Coastal Fisheries. Alden is one of the center’s founders.

Friends and colleagues from all aspects of Robin Alden’s 45-year career as a fisheries expert filled the ballroom at the Samoset Resort in Rockland on Friday, December 8. The night celebrated Alden’s retirement from the role of executive director at the Maine Center for Coastal Fisheries, according to a press release.

The Samoset was a fitting location for the event, as earlier in her career, Alden started the Maine Fishermen’s Forum, hosted there annually ever since. Alden also served as commissioner of the Maine Department of Marine Resources and helped form the newspaper Commercial Fisheries News. She went on to be a founding member of the Stonington-based Maine Center for Coastal Fisheries in 2003 to expand the reach of Downeast community fishing groups.

Cutler fisherman Kristan Porter was the master of ceremonies for the evening. Speakers included Sen. Angus King and Rep. Chellie Pingree, as well as a video presentation from Sen. Susan Collins.

“The evening was lovely,” Alden said, adding: “I am truly lucky to have this moment and to learn some of the ways I have inspired fisheries leadership. The memories will nurture me as I decide what is next.”

The new executive director of the Maine Center for Coastal Fisheries is Paul Anderson. Music for the evening was provided by Blue Northern, a local bluegrass band that includes Anderson.