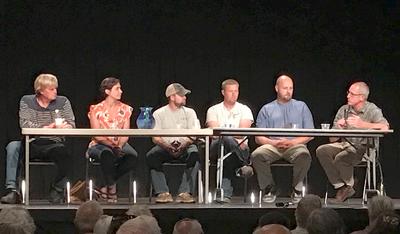 How will climate change impact Maine’s fishing industry, and what can be done to ensure the long term sustainability of fisheries and fishing communities in the face of rapid change? These were the key questions addressed in a talk on June 19 at the Stonington Opera House, given by Dr. Jon Hare, Science and Research Director for the National Oceanic and Atmospheric Administration’s (NOAA) Northeast Fisheries Science Center.

As the Gulf Stream moves farther north and the planet heats up, the Gulf of Maine has become one of the fastest warming marine systems on earth. From 2004-2013 it warmed twice as fast as in the previous 30 years, Dr. Hare explained. He asked the audience what they would do if the room suddenly began to fill with water to help explain how species respond to rapid changes in their environment. “Species are already responding in one of three ways—they are moving, enduring, or adapting,” he said. Citing changes in distribution and productivity for yellowtail and winter flounder, the decline of the lobster industry in southern New England, and the rapid rise of the Jonah crab industry, Dr. Hare explained that climate change offers both challenges and opportunities.

But knowing just how to adapt in the face of climate change, is what Dr. Hare called a “wicked problem.” It’s a term coined by German design theorist Horst Rittel, and refers to problems that seem impossible to solve because the factors are in flux or difficult to define. They can trap us into falsely assuming there is one solution, or cause us to do nothing because of overwhelming complexity.

To avoid these traps, collaborating with all stakeholders within the entire ecosystem, and engaging in continuous rounds of decision making as new information is uncovered is critical, said Hare.

Fishermen, community groups, resource managers, scientists and policy makers must work together at the local, state and federal levels and across the rivers, estuaries and ocean that make up the larger ecosystem. People are also part of the ecosystem, and more needs to be done to understand the social, economic and political dimensions of fisheries management, explained Hare.

With this in mind, a new partnership between the Maine Center for Coastal Fisheries, NOAA Fisheries, and the Maine Department of Marine Resources was announced at the event. This partnership, known as the Eastern Maine Coastal Current Collaboration will develop a scientific framework with the capacity to support ecosystem-based fisheries management in the region. “Approaching the ecosystem in a systematic and collaborative way will make us more resilient and our fisheries more sustainable as we look to the future,” said MCCF Sr. Scientist Dr. Carla Guenther.

One audience member asked panelists what they have found most surprising about the fisheries in the last decade. Answers included the decline of shrimp and mussel populations, the large increase in lobster and growth of the offshore lobster industry, the appearance of black sea bass in the Gulf of Maine, and the rebound of scallop populations.

Affordable access to the fisheries, diversification, corporate vs. owner operated boats, allowable catch limits, and the use of anecdotal evidence collected by fishermen, were just some of the many issues discussed by the panel, and at a dinner following the event. They underscore just how complex a wicked problem can be.