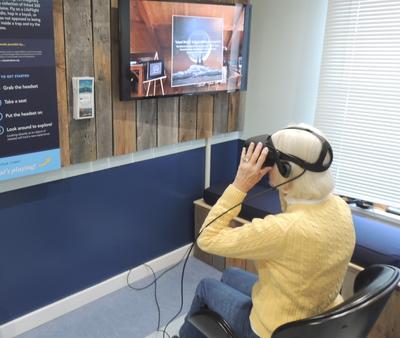 Barbara Whitman takes a virtual trip on a lobster boat.

Ever wonder what it was like to fly in a LifeFlight helicopter? Kayak through Maine waters? Or experience what fishermen do every day out on the ocean? Explore Islesford Boatworks?

A new virtual reality exhibit at Maine Center for Coastal Fisheries’ Discovery Wharf will let an individual put on a headset and do just that.

“It was really amazing,” said Barbara Whitman, the first person to don the headset, after the ribbon was cut on the exhibit at a May 30 reception. “I went in a lobster trap, with the fish coming up.”

The exhibit was made possible by the Island Institute, which created the reality experience in 2016 in partnership with The Yarn Corporation and Big Room Studios of Portland. The Island Institute is a nonprofit organization in Rockland that works to sustain Maine’s island and coastal communities.

“This is one step in finding a way for us to dance together and complement each other’s work,” MCCF Executive Director Paul Anderson said.

The virtual reality exhibit joins the touch tank and interactive exhibits at the Discovery Wharf. Last year, 7,000 people visited the Discovery Wharf, which educates visitors about Maine’s fisheries, according to a press release.

“It took years and a great number of partners to get this exhibit to Stonington,” said MCCF Fisheries and Seafood Associate Patrick Shepard. “We’re excited to bring our communities to life.”

The Discovery Wharf is free and open Sunday through Friday from 10 a.m. to 4 p.m. through Columbus Day.