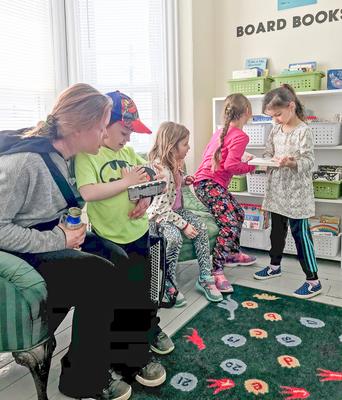 Students read from the variety of book choices at the Stonington Public Library.

Kindergarten students from Deer Isle-Stonington Elementary School were at the Stonington Public Library on April 24 to debut an ABC book they created and published this school year.

Each year, the kindergarten class takes part in a year-long alphabet study, according to teacher Tasha Brown. This year, the students brainstormed animals that would be featured in their book, and researched images for drawing samples and sketches. The images were put into the book to coordinate with a specific letter. Once completed, it was sent off for publishing earlier this year.

Brown said the publishing company that was used for the project was Student Treasures. In addition to printing the books for the class, the company also awarded the school a $100 grant as part of a giveaway contest. Because more than 20 books were ordered, they also received a $35 gift card, which will be used to jump start another book publishing project for next year’s kindergarten class.

The kindergarteners were at the library in Deer Isle to present their book. At the end of May, the group will hold an ABC Buffet at the school, where they will also sign their book for their families. 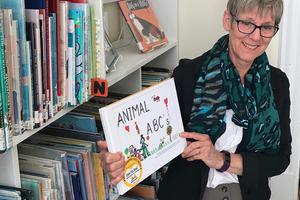 Students read from the variety of book choices at the Stonington Public Library.