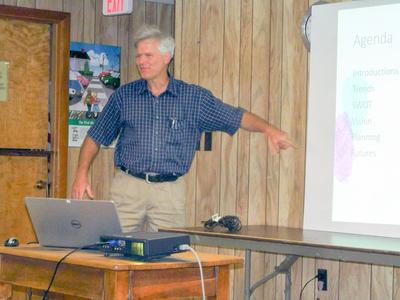 Deer Isle Town Manager Jim Fisher led a discussion about the future of the town during a forum sponsored by the Chase Emerson Memorial Library and held at the town office on October 10.

The vision for the future of the town of Deer Isle was the focus of a public discussion led by Town Manager Jim Fisher at the Deer Isle Town Office on October 10.

The discussion was sponsored by Chase Emerson Memorial Library, but held at the town office after high attendance at a similar event a few months earlier led to difficulty in seating and overall participation.

Fisher summarized discussion at the previous talk, including data about declining school population, struggles with affordable housing and lower numbers of people in the workforce.

He also highlighted some of the strengths of the town, such as tourism opportunities, coastal landscapes and a creative, artistic community.

After summarizing the information collected previously, Fisher opened the floor for suggestions for a vision of what the people in town would like to see as Deer Isle moves toward the future.

One of those suggestions included capitalizing on the arts, and even building a magnet high school for the arts, which could bring in younger families and job opportunities.

Anneli Carter-Sundqvist, co owner of the Deer Isle Hostel, noted that she would like to see affordable housing not only for people looking to live on the island year-round, but also for those coming for seasonal job opportunities.

“Many people who have apartments over their garages could house those workers, but instead rent them out through [internet rentals],” she said.

Carter Sundqvist added that while people talk about having more restaurants in town, those businesses cannot run without seasonal employees, something that is “lacking” for many on the island.

Library board member Alan Chesney, along with others in the crowd, suggested that there are “ample opportunities” for cooperations between the Deer Isle and Stonington boards of selectmen, including mutual fire departments, sharing costs for law enforcement and infrastructure work, and tourism opportunities.

“What if, because we’re looking at big picture goals, right? What if there was one town government for both Deer Isle and Stonington?” Chesney proposed with a half chuckle.

The suggestion was met with mixed responses.

One of the common themes in a proposed future vision for the town was the idea of looking at Deer Isle as an island, and not just the town. As the school population continues to decline while the retired and elderly population continues to grow, many in the audience said that the need for collaboration between the island communities is crucial moving forward.

Fisher also noted the need for public participation in different groups looking into how to make the community more sustainable moving forward.

“We can’t do this without the public’s help,” said Fisher. “I can help with the process, but I can’t write this thing for you. It has to come from the people in town.”

Fisher said he plans on holding another Deer Isle futures discussion in a couple months.